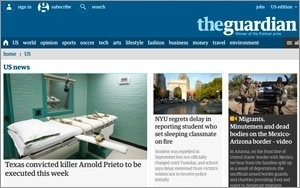 Once the gatekeepers of the traditional media kingdom, many journalists now find themselves struggling to keep pace with rapidly evolving media consumption habits and an endless series of new digital platforms.

Meanwhile, audience data has become just as important to editorial operations as it is to advertising sales, allowing reporters to focus and craft their news content to better cater to the audience’s needs.

To that end, The Guardian has created a new audience analytics platform that is accessible to every Guardian employee on the editorial as well as business side.

It supplies more insight into crucial intelligence, including where the digital audience for every piece of content is coming from; how quickly that audience accumulates; how engaged they are with the content; whether and where they’re sharing the content via social media, and what they’re saying about it.

On the quantitative side, in addition to basic measures like total page views, reporters using the platform can access more sophisticated metrics, such as page views per minute and median dwell time on a particular page, as well as the distribution of actual time spent around that median figure.

Editorial staff can track the geographic breakdown of audience accumulation -- for example, U.S. versus U.K. -- plus the type of device and browser or app they’re using. They can also see how much of the total audience has arrived from various sources over time, including The Guardian Web site, Guardian emails, search engines, and social sources like Twitter, Facebook, Reddit, and Outbrain.

The analytics platform provides even more insight into social-sharing patterns, down to the level of individual reader comments and shares, and how many incremental page views each social share ends up contributing.

The Guardian’s audience development editor Ian Saleh noted that when Guardian published content about the protests in Ferguson, Missouri, editors could see in real-time how local community leaders were sharing links to the content and contributing to the total audience.

Saleh added that while his bailiwick is editorial, the analytics platform should also be useful to The Guardian’s business side: “Obviously, the advertiser is interested in this in the same way an editor is, in order to understand how the audience is interacting with a story and how to serve them advertising or a related piece of content. We’re trying to match the right kind of content to the right reader at the right time.”

It’s worth noting that other newspapers are at least considering implementing similar systems to empower editorial staff with audience insights. In The New York Times’ “Innovation” strategy document leaked last year, the authors emphasized that the newspaper was falling behind in “the art and science of getting our journalism to readers.”

Among their other recommendations, the NYT called for participation by all members of the newsroom in activities traditionally left to other parts of the business, including search and social optimization, as well as giving the newsroom greater involvement in disciplines like design, technology, consumer insights, and research and development.