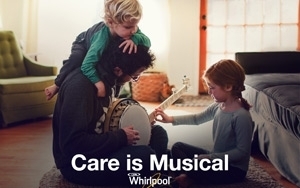 Last year, Whirlpool and agency DigitasLBi launched the “Every day, Care,” campaign to showcase how even the most seemingly insignificant chores play a huge role in shaping society and future generations.

Now, DigitasLBi and Whirlpool are continuing this effort by inviting people to celebrate caregivers responsible for mundane chores via a new contest.

Entrants are invited to record themselves singing, humming or playing "You Are My Sunshine," dedicate it to someone whose acts of care has played a vital role in their life and upload the video to Whirlpool.com/everydaycare by Sunday, January 25.

Singers have a high bar to live up to since last year's TV spot running featured Johnny Cash singing the tune.

Then, on February 8 during the Grammy Awards, Whirlpool will air one individual's thank you in a 30-second commercial. The winner will be filmed during the Grammy's at their home and then fed to CBS, the network airing the show. This is the first time Whirlpool has run a TV spot during a live event as big as the Grammy’s.

"Music plays a vital role in the care we give and receive, day in and day out," said Jon Hall, senior brand manager Whirlpool brand. "Care and music both require commitment and sacrifice, both have the power to transform, and ultimately enable great things, which is what the 'Every day, Care' campaign is all about."

DigitasLBi created a Grammy specific site for contest entries and the agency is utilizing digital media (display and search), social media, and the brand Web site to support the initiative.

In addition, Grammy-nominated performer Hunter Hayes serves as the campaign's ambassador promoting the contest in media appearances and via social media channels. Hayes' involvement represents a new direction for Whirlpool as it is the first time the brand has aligned with a well-known celebrity.

"We believe Hunter aligns well with our brand campaign 'Every day, Care' and our Care is Musical contest.," says Andrea Kroll, vice president/group account director from DigitasLBi Chicago. "The sacrifices Hunter’s parents made cooking, cleaning and providing him everyday care contributed to where he is today. The value of that care is significant and closely aligns with the Whirlpool brand."

DigitasLBi is also activating a Grammy Night BrandLive room, similar to a real-time marketing war room, that brings together an integrated team of key stakeholders across Whirlpool and DigitasLBi to view the Grammy’s.

Whirlpool says it will participate in conversations that strategically align with the brand’s purpose and message around this campaign and will create content in real time and using paid media to amplify the message.

Digitas Chicago has been the agency of record for Whirlpool Corporation since 2006, handling interactive and relationship marketing for its entire U.S. brand portfolio, which includes Whirlpool, KitchenAid, Maytag, Jenn-Air and Amana brands.