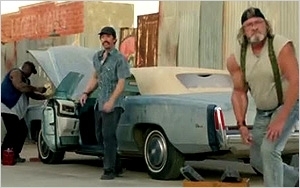 Skittles has released a second teaser video leading up to the first Super Bowl ad in the brand's history.

The new video shows folks in a small town — ordinary-looking except for their outrageously muscular arms — interrupting their daily activities to heed the call of a clanging bell. Screen message: "Super Bowl Sunday. It will be settled" (followed by a Skittles logo and a hashtag, #SettleIt).

According to press reports, the candy's Super Bowl ad, from DDB Chicago, won't feature Seattle Seahawks running back Marshawn Lynch, even though Lynch has an endorsement deal with the brand.

Skittles' first Super Bowl ad teaser video, released Jan. 6, was a more general heads-up to its fans. Its premise: The brand was so excited about its first-ever Super Bowl ad that it threw a Skittles tailgating party in the parking lot of the University of Arizona stadium — with retired National Football League pro Kurt Warner in attendance — four weeks before the big game.