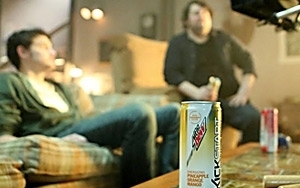 With a core customer base of young adult and teen males, Mountain Dew has long been known as a digital innovator. In addition to using Snapchat's "My Story" feature, the new campaign, "It All Starts with a Kick," will offer other digital and social content extensions through platforms including Vine, Twitter and YouTube, using a #Kickstart hashtag.

The pre-Super Bowl spot features the track "Out The Speakers (Feat. Rich Kidz)" by A-Trak and Milo & Otis, and former "So You Think You Can Dance" contestant D-Trix.

The brand is also launching a new Kickstart site, and plans an eight-month Kickstart sampling tour in which five trucks will visit college campuses and retail locations.

Launched two years ago, Mtn Dew Kickstart includes varieties positioned as alternatives to traditional morning beverages, as well as ones marketed as energizing choices for evening.

The line has become one of PepsiCo's most successful beverage introductions of the past decade. Its sales jumped by more than 50% in its second year, to reach nearly $250 million, according to the company.