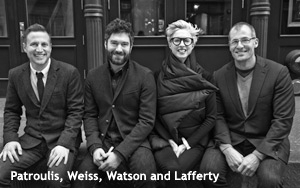 Over the past three years, BBH New York has continually increased revenues, won awards, brought in new faces and greatly changed the way it works.

In light of these creative and business accomplishments, the Publicis-owned agency is reorganizing its executive team. Current Chief Creative Officer John Patroulis has been named to the newly created Creative Chairman position and Executive Creative Director Ari Weiss is promoted to CCO.

After 20 years at BBH, current Chairman Emma Cookson will leave the agency for new opportunities.

“John, Ari, [CSO] Sarah [Watson] and Emma have been our dream team over the past few years. Together, they’ve led BBH New York to creative heights — bringing in new business like PlayStation and Newell Rubbermaid, parlaying those wins into massive honors for the agency, and establishing beautiful client relationships that we’re only at the cusp of cultivating,” said Pat Lafferty, North American CEO of BBH.

Patroulis and Weiss start their new positions February 1. Then, the agency will be guided by the core leadership team that will include Patroulis, Weiss, Watson and Lafferty.

Lafferty said that in order to continue the agency’s momentum, “we knew the leadership shift had to come from within. John and Ari are two of the most talented creatives in the business, and this shift places creativity even more firmly at the heart of the BBH structure — a move that will offer our clients more versatility than ever.”

The Creative Chairman role has been created for Patroulis, due to his "amazing" performance during his almost four-year tenure at the agency. In the past year, revenues increased more than 50%. Patroulis will be responsible for guiding the overall creative vision, leadership and output of the agency, maintaining an active leadership role on current client wor, and leading new business efforts.

Patroulis will now also oversee several other senior managers and functions, including the CCO, the Head of Integrated Production and Technology, BBH’s internal Public Relations group and all future creative capability investments.

“Creativity, and the value it creates for our clients and for us, is our business model. This new role gives me the opportunity to have an even bigger impact on the way the agency thinks, operates, and makes things,” said Patroulis.

Ari Weiss has been at BBH NY for the past four years and in his new role will be responsible for leadership of the creative and design departments, including recruitment and working closely with the planning, account service and production departments. He will continue to report directly to Patroulis.

“Any agency would kill for our roster of clients, and each one has an incredible story to tell in their own unique and breakthrough way," says Weiss. "I’m very excited to build on the dynamic that John, Sarah, Pat and I already have to help make smarter, bolder more culturally relevant work than ever before.”

Cookson's last day will be February 20. "In BBH's 33-year history, Emma stands as one of the agency's all time most talented and influential planners," says Sir Nigel Bogle, founder BBH. "She has been the architect of a wide range of BBH's best work, as well as being one of the pioneers in establishing BBH in America, having moved to New York in 1999 initially to lead the Planning discipline and latterly as CEO and then Chairman. We will miss her and wish her well in whatever path she takes next."