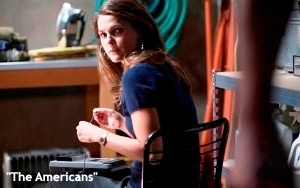 That’s the feeling one gets when watching NBC’s upcoming spy series “Allegiance” -- particularly if you watch the premiere episode right after previewing this week’s season premiere of “The Americans” on FX.

That’s what I did on Monday morning -- fully expecting “Allegiance” to be a typical (and by implication, pale) “network television” imitation of a cable TV drama -- in this case “The Americans.”

However, my expectations were not met. “Allegiance” turns out to be nearly as unsettling as “The Americans” -- a nice surprise.

Why write about them both in the same blog post? Their similarities make it irresistible.

Here’s the relevant intelligence on these two spy dramas:

“The Americans,” starring Keri Russell and Matthew Rhys, returns for its third season Wednesday (Jan. 28) on FX (at 10 p.m. Eastern). The two play a seemingly typical American couple living in the suburbs of Washington, D.C., who happen to be Soviet spies.

As the third season of the series opens, it’s the height of the Cold War. The year is 1982, identified as such by a news report seen on the show (on “The NBC Nightly News” anchored by Tom Brokaw) about the death of Soviet Premier Leonid Brezhnev.

The two main characters of “The Americans” are deeply embedded in their suburban lifestyles -- which is to say, they speak perfect English, they have kids born and raised in America, and for the most part, they have succeeded in cloaking the secret spying portion of their lives under deep cover (most notably the use of very convincing disguises).

As you might expect of a show on FX, “The Americans” gratuitously pushes the boundaries of sex and violence, which neither detracts nor adds to the engrossing and discomfiting nature of this series. In “The Americans,” everyone’s hiding something; the suspense stems from their continual and, by all appearances, stressful efforts at evading discovery.

“Allegiance” premieres Feb. 5 on NBC. It’s also about secret spies who live among us. In this show, they live in New York City in the present day. If this show’s premise is to be believed (and I don’t see any reason why it shouldn’t), then U.S.-Russian spying today is pretty much the same game that was being played back in the 1980s when Russia was the Soviet Union.

In “Allegiance,” the embedded couple are played by Scott Cohen and Hope Davis. Her character in particular represents a divergence from the Keri Russell character in “The Americans” because the Davis character in “Allegiance” makes no effort to conceal the heavy Russian accent with which she speaks English. Maybe that’s because there are so many Russian immigrants in New York anyway that such an accent is not something one has to keep hidden anymore.

Whatever the reason, for a “network” show, “Allegiance” has much the same discomfiting quality as “The Americans.” In the series premiere, which NBC provided for preview, this Americanized couple is being re-recruited for Russian spy work after having been out of the spy business, apparently, for a while. One reason the Russian intelligence services want them back: Their son is a brilliant analyst for the CIA.

Yes, this son is “brilliant” in the more or less typical way we have come to expect for TV characters of his type: For some reason, he’s better at analyzing, well, just about anything better than intelligence agents with 10 times his experience and training. Like similar such whizzes (the young geniuses of CBS’s “Scorpion” come to mind), he conducts “research” in mere minutes (if not seconds) and has a memory that is so photographic, he can remember everything about a 400-page report he was able to speed read just hours before the very first assignment -- the interrogation of a Russian defector -- that he’s ever been invited to participate in.

Sure, this kind of character often seems unbelievable to me, but I liked “Allegiance” -- and this character -- anyway.

Who will win this ongoing game of Spy Vs. Spy between the United States and Russia? I look forward to watching both “Allegiance” and “The Americans” to find out.