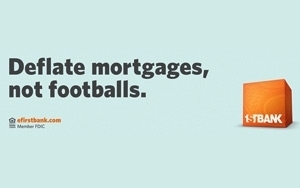 While other companies have spent months methodically creating their Super Bowl advertisements, financial institution FirstBank developed its campaign in about a week to capitalize on the perfect pop culture moment that is DeflateGate.

At first, FirstBank had no at-game advertising plans, but the New England Patriot's scandal was too much of a perfect opportunity to ignore.

The Colorado-based company is currently expanding its home loan business in Arizona, and has 15 branches in the Glendale/Phoenix/Scottsdale metro area, the region hosting the game.

Developed by ad agency TDA_Boulder, a 14’ x 48’ billboard — on the last mile of the main access road to University of Phoenix Stadium, where Super Bowl XLIX will be held this Sunday, February 1 — features low-pressure footballs to remind homeowners of FirstBank’s low-pressure loans under the tagline "Deflate Mortgages."

The board is newly built, construction completed only last week. This brand new media signage was a fortuitous opportunity, since agency executives say securing the billboard inside a mile of the Super Bowl stadium was its biggest challenge. Billboards are typically bought far in advance. Now, FirstBank has it for four weeks, starting Monday, January 26. Media provider is Outfront Media, New York, formerly known as CBS Outdoor.

This is the bank's most rapidly deployed effort, and it was a team effort between the bank and its agency. The bank has said in general that it is interested in coming up with topical executions. Agency executives saw that this sports scandal could be made relevant to the bank’s Arizona marketing needs. Originally, the bank had no plans to specifically create a campaign for its market expansion.

"Deflate Mortgages” is not FirstBank’s first foray into topical advertising. Previous efforts tying the brand’s messaging to current events include both national events, such as Congressional gridlock, and local moments, such as, in Arizona, the NFL Cardinals rivalry with the Seattle Seahawks.

Meanwhile, the bank is continuing its “Mortgages Made Easy” phrase — which has been the bank’s long-term positioning —  for its other advertising initiatives. To that end, FirstBank is running advertising to introduce a Person-to-Person money transfer app that runs across all FirstBank’s territories.

TDA_Boulder, in Boulder, Colo., is a strategically-focused agency with $30 million billings from clients including Daiya Foods, General Mills, Deschutes Brewery, Patagonia and Newton Running. FirstBank is a division of FirstBank Holding Company, privately held and majority owned by its management and employees. It has more than 115 branches in Colorado, Arizona and California and is Colorado’s largest locally owned bank.