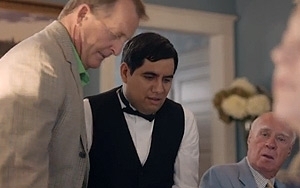 It may not seem like it today (particularly in the Northeast), but golf and air conditioning season is approaching. Mitsubishi Electric Cooling and Heating Division is first out-of-the-gate with more television commercials featuring professional golfers keeping their cool off the links.

“These are people who are used to being cool under pressure,” Patrick Scullin, chief creative officer at Atlanta agency Ames Scullin O’Haire (the brand's creative agency), tells Marketing Daily. “Everyone knows [their coolness] if you're a golf fan. This gives a chance to show what these guys are like off the course.”

The first of two ads, scheduled to run during the Golf Channel’s coverage of The Mitsubishi Electric Championship at Hualalai, Hawaii, depict two of the brand’s sponsored golfers, Fred Couples and Fred Funk, facing “everyday, awkward situations,” Scullin says. In the first spot, Couples is asked to narrate a scary movie for his date (who has her eyes covered). As Couples describes the action on the screen, his date questions his description of “Zombaliens” (zombies and aliens), revealing that Couples is also covering his own eyes.

In the second commercial, Funk gets into an involuntary dance with a server trying to navigate a restaurant’s tight spaces. After the waiter and Funk agree on their respective directions, Funk accidentally crashes the waiter (and his full tray of food) into a nearby table. The message from both spots is the same (expressed via voiceover): “Don’t get caught out of your comfort zone.”

“This is the fourth year of [this strategy],” Scullin says. “It’s been a successful campaign. So much so that other golfers have asked Mitsubishi Electric to sponsor them, so they can be in the spots.”

Although admittedly early for the season (and likely to get overlooked by Super Bowl noise this weekend), the ads are timed to the company’s sponsorship of the Hualalai championship and will work to reach the brand’s target audience of consumers with some disposable income, Scullin says. They will continue throughout the golf season.