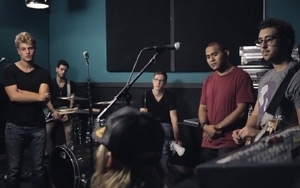 Besides airing an advertisement during CBS’ Feb. 8 broadcast of the 57th Grammys, Hyundai is, for the third year, co-sponsoring the Grammy Amplifier, a Hyundai-sponsored online music initiative for emerging artists. This time around, Grammy winner Mark Ronson will be "official ambassador."

The kickoff was Jan. 27 at just-launched GrammyAmplifier.com, where artists can enter by submitting tracks. Ronson, along with the program's curators (and Grammy nominees) The Band Perry, Ziggy Marley and Allen Stone, will sift through the submissions, culling the crowd down to 25 semi-finalists based, in part, on social amplification. Those artists will proceed to a Grammy Amplifier mentorship process. The curators will then shave that group of 25 down to a short list, and Ronson will select the three winners.. Those three will get a studio recording session with a Grammy-winning producer; a music video with an established director; or an opening spot for a noted musician and/or at a music festival.

The Grammys broadcast TV spot features Ronson and 2014 Grammy Amplifier winner Eyango working together on the studio recording of Eyango’s track, "Precious Love." Jon Budd, senior group manager, new media at Hyundai Motor America tells Marketing Daily that the 2015 project extends last year's effort, as Hyundai had planned to support Eyango beyond just a studio session, seeing this year’s Grammys as an opportunity. "The online video is a culmination of that program captured in three minutes.” The TV spot, he says, is a short version of that video. The other two artists, the band Bonavox (pictured) and Jessica Faith also have long-form videos on the site.

GreenLight Media & Marketing, Hyundai's agency of four years for content entertainment and music, developed the partnership with the Grammys and renegotiated the three-year renewal. Dominic Sandifer, president and co-founder, tells Marketing Daily that in year one of the Amplifier program there were something over 500 total submissions. "Last year we got over 5,000, and did that with a very limited marketing budget."

Ronson, a kind of Crawley-esque scion of British real estate, music, politics, business, and pop, is riding a popular tsunami from his "Uptown Special" album and its mega-single "Uptown Funk" featuring Bruno Mars. The former New York club DJ has also produced late-career albums for Duran Duran and Paul McCartney, and produced for Adele, and Amy Winehouse's "Back to Black." He was also one of the artists involved in Hyundai's initial Grammy effort in 2011, the Re:Generation project, where contemporary artists developed programs with legends.

"We have had some really great artists," says Sandifer. "Last year we had [singer/songwriter] Ariana Grande. The first year we had one artist involved, [Linkin Park co-founder] Mike Shinoda. We've had Kelly Clarkson as curator, and several others."

Last year, as part of the program, Hyundai backed one of the 2014 winners, Bonavox (pictured) for a small tour where they opened in four venues, per Budd. The automaker provided them with four Santa Fe crossovers, and the Grammys crew shot video, part of the library of content on the site. Jessica Faith was the other winner last year.

“We have looked at the return on relationship with the Grammys, and its very positive,” says Budd. “When you back to whole strategy of why we are involved with music, it's to reach an audience who may not know about Hyundai and they can discover us through music. So we measure impact on impression of us as brand.”

The effort is also supported by a digital campaign on music sites like Billboard.com and RollingStone.com, on Spotify and Pandora, and via buys on music-specific digital networks. Budd says that through the year Hyundai will promote the artists and their participation in the Amplify program at music events and festivals. Hyundai also sponsors next week's Billboard Power 100 event.

On the ground, as part of the Grammy relationship, Hyundai gets its vehicles on the red carpet, and the official after-party. Hyundai also provides the chauffeur vehicles for artists during Grammy Week.
automotive, awards, music, partnership
Next story loading