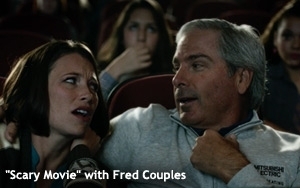 For the past four years, Mitsubishi Electric's U.S. Cooling and Heating has targeted golf fans through TV ads, digital channels and by serving as a corporate sponsor of the PGA Champions Tour.

"The spots have been incredibly popular and continue to raise brand awareness for Mitsubishi Electric as the leader in more efficient ways to cool and heat, while providing the ultimate in personal comfort for one room, or the whole home," says Patrick Scullin, Managing Partner/Executive Creative Director of ASO.

In one ad, Fred Couples shows he isn't a fan of horror movies while at the theater with his lady friend. He pretends to narrate the movie while covering his eyes. He is meant to stay in his "comfort zone." The spot can be seen here.

In another new spot, Fred Funk finds himself engaged in an involuntary dance with a waiter as he tries navigating his way through tight quarters in a restaurant. The spot can be seen here.  Both spots don't identify either man, emphasizing the campaign's strategy to appeal to golf fans. "The audience knows these players well–– they are rock stars on the Champions Tour," says Scullin. "It is a very popular campaign with golfers and players on the Champions Tour."

Still, the ad's humor is designed to appeal to everyone, even if they don't know these men are professional athletes.

In total, the agency has produced twenty commercials with top golfers under similar themes. "The only surprise is how comfortable the golfers have become in our putting them in uncomfortable situations," says Scullin. "Due to the popularity of the campaign and the feedback that Fred Couples, Corey Pavin and Fred Funk have received, they are game for just about anything–– which makes for fun shoots."