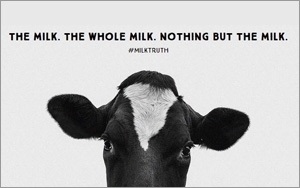 The U.S. milk industry is launching another campaign to try to halt the slide of milk consumption.

This time, the industry's marketing arm, the Milk Processor Education Program, or MilkPEP, will focus on harnessing social media to counter growing negative buzz and misconceptions about milk.

For the new "Get Real" campaign, unveiled in conjunction with the National Dairy Council and Dairy Management, Inc. during this week's Dairy Forum 2015 in Boca Raton, Fla., dairy farmers and other members of the industry, plus veterinarians, scientists and nutritionists, are being recruited to use social media to spread the positives about milk's nutritional story and address negative stories and themes that have been proliferating on the Net and social.

They will employ the hashtag #MilkTruth to convey "five truths," answer questions and refer consumers to a dedicated MilkTruth site offering more in depth information.

Those five points, according to Dairy Herd Management, include: "Milk contains a lot that's good, without the 'bad' that some people think (like excess calories and fat); milk is simple, especially compared to non-dairy alternatives that can have more than 10 ingredients; and milk provides high-quality protein (almond and other non-dairy alternatives may have just 1 gram of protein)."

The campaign is also employing media outreach and paid syndication, according to DHM.

The negative buzz about milk has been intensified by an article last year in the British Medical Journal in which researchers suggested that high milk consumption could be linked to earlier deaths and greater risk of bone fractures, the DHM site reports. Although the study's authors stressed caution about the research's limitations, the story, "with a misleading headline," was picked up by the U.S. press, and then spread on social media, and "the barrage of negative news has lowered consumer confidence in milk," reports DHM.

The dairy industry has also faced growing criticism from animal rights organization PETA, not to mention greatly increased competition from almond milk and other non-dairy beverage alternatives, which frequently take shots at milk in their own marketing campaigns.

“The truth is that consumers are out there getting information from a lot of different sources. It is really important that we set the record straight and start telling the truth about milk,” MilkPEP Marketing Director Victor Zaborsky told AgWeb.com and AgriTalk.

"We can't have these headlines that 'Milk Can Kill You' and not stand up for the truth," MilkPEP CEO Julia Kadison told the Associated Press this week. The new campaign will directly take on the "seeds of doubt" planted by "anti-dairy folks," she said.

A year ago, MilkPEP replaced its long-running, high-profile "Got Milk?" campaign with a "Milk Life" campaign that has been stressing milk's high-protein content, and particularly its benefits at breakfast. At the time, MilkPEP said it hoped that Milk Life would become its "next 20-year campaign."