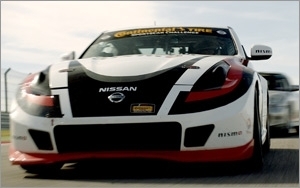 Nissan has released a sneak peek at its Super Bowl ad, its first in 20 years. And it is about fatherhood — something Nissan has been talking about all month. Actually, Nissan has let eight or nine other people talk about fatherhood: YouTube content producers with a following, whom Nissan has tapped to create movies up to eight minutes long about dads, tagged #withdad. They are at WithDad.com and NissanUSA.com

Nissan, which released the short clip of its actual spot on Wednesday, decided to make the ad, all of which won't be revealed until it broadcasts during the game, a full 90 seconds in length. It had originally been slated for a 60-second slot.

Fred Diaz, SVP, Nissan North America sales, marketing and operations, tells Marketing Daily that the company decided on the longer form because “we felt we have a special message we want to share with America: We get the fact that we all have moments in life where we are struggling to make ends meet, and to have a work/life balance. While the 60-second did it justice, we felt we needed to give the story more time to breathe.”

To get that wider space, Nissan worked with NBC, “whom we have a great relationship with. And there is always movement, so people drop out, or change positions, so we were able to grab that extra space,” says Diaz.

The teaser clip, set to Harry Chapin's “Cat's In The Cradle” shows a woman delivering a baby as her husband looks on in wonder, cutting to dad doing his day job: race car driver.

Diaz says the campaign, via AOR TBWA\Chiat\Day, is about awareness not merely product pitches, and the racing theme aligns well with Nissan’s identity. “From data, research and analytics we realize we need to increase awareness of the Nissan brand and that was part of the rationale to make the ad and return to the Super Bowl.

“And after months of concepting, where we knew we had to give the dad a profession, and after looking at jobs like carpenter, plumber, banker — you name it — we decided Nissan has a great heritage with racing. So we decided to showcase his profession as a race car driver, and follow the progression [and challenge] of his career — from novice to pro.”

Nissan, which has re-ignited the NISMO (Nissan Motorsports) factory-customized performance car sub-brand in the U.S. with cars like NISMO Juke, has also been spotlighting its racing with programs like GT Academy, a reality TV/racing development hybrid where digital gamers with mad skills get to compete to be actual Nissan race team drivers. Diaz says that while the ad is not explicitly a nod to GT Academy, there is a similarity: like the GT Academy participants, the guy in TV spot starts as a novice. And the ad will also have “a surprise or two” for avid NISMO and racing fans.

Post-game, the plan, says Diaz, is to continue the campaign as a multimedia effort. “It's a full 360-degree campaign — digital, TV, print, broadcast radio, etc. — after the Super Bowl. And we will see how long it can run.”

Toward Nissan’s brand-building ambitions, the campaign also extends the “fewer, bigger, better” strategy Nissan launched last year to focus on big audiences rather than dolling out dribs and drabs from a media perspective. “What was happening in 2013 and prior is that we were trying to water all flowers, and we were so fragmented we were ineffective.”

He says the bottom line for Nissan is not to focus on driving product volume at the expense of brand equity and awareness. “If you cultivate the bottom of funnel, before long your cash cow dries up. You have to feed that cow.”