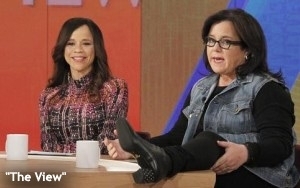 Two TV stories in the news lately are great examples of the wide gulf that sometimes exists between reporters in the pursuit of truth and those who wish to quash or at least blunt those reporters’ efforts.

These two particular stories illustrate the fruitlessness of the PR strategy known as the “official” denial. Not that you can blame anyone for denying a story that reflects unfavorably on the subject in question -- a TV show, a network, a production company, a TV personality or performer. But when the denial is inserted midway or thereabouts into a story that in all other ways runs overwhelmingly in the opposite direction, then the denial feels, to put it bluntly, like a lie, whether it is one or not.

Example No. 1 is this persistent story that ABC plans to use Rosie Perez’s upcoming commitment to appearing in Larry David’s Broadway play, “Fish in the Dark,” as a pretense for dropping her from “The View.” Perez joined “The View” last September, as part of the revamp that brought back Rosie O’Donnell and also added political operative and commentator Nicolle Wallace.

The play is due to start previews on Feb. 2, and Perez has been taking time off from “The View” this month to rehearse. With Larry David as playwright and star, the play is reportedly selling a ton of tickets in advance and, if the reviews turn out positive, Broadway wags predict it will have a long run.

Variety.com has been advancing this story for weeks, most recently in this story earlier this week. This story (and the other stories that have preceded it) cite unnamed sources who insist that ABC is dissatisfied with Perez and seeks to jettison her from “The View.”

To me, it comes across as a strong story. It is filled with details that strike me as accurate. As a reader, I can only hope that the reporter’s sources were knowledgeable and truthful. Since they’re unnamed, one assumes that the reporter and, by extension, his editors, have all the confidence in the world about their sources’ veracity.

At any rate, plunked down into the middle of this story is this statement from ABC: “These unnamed sources are wrong,” an ABC spokesperson is quoted as saying. “As was always the plan, the amazingly talented Rosie Perez took time off to rehearse for her Broadway play. We’re eagerly looking forward to having her back on February 3rd. Any speculation to the contrary is simply untrue.”

It was responsible on the part of the reporter to include ABC’s statement in the story, since the “rules” of journalism (such as they are) call for this kind of “balance” in a news story such as this. But the story otherwise runs roughshod over this denial and, in the end, one tends to believe the reporter’s account, while discounting or dismissing ABC’s denial entirely.

Example No. 2 was this story in the New York Post, the second one the paper has published recently featuring interviews with past contestants on “The Biggest Loser” on NBC.

In the stories, past contestants on the extreme weight-loss show are quoted (openly and by name) telling tales of the rigors they experienced on the show. According to their stories, the exercise and diet programs they were put through on the show were not only dangerous to their health, but they were meaningless in the long run because they eventually gained back all the weight they lost anyway.

“I was eating baby food,” one female contestant is quoted as saying. “I’d wrap myself in garbage bags to sweat. We’d use the sauna for six hours a day. We stopped eating and drinking and would work out for four hours a day. People were passing out in the doctor’s office.”

The stories are filled with testimony such as this. And since the testimony comes from multiple contestants, it’s hard to be persuaded that these people are not telling the truth. And yet, the most recent story contains this statement attributed to unnamed “producers”:

“We stand behind the integrity and safety of the show. Our contestants are closely monitored and medically supervised.”

Juxtaposed with the statements from the past contestants, this statement doesn’t ring true. Perhaps this statement could have been strengthened if it had included additional details and information about all that monitoring and medical supervising that they’re claiming they do.

Instead, it does little to dilute the impact of what the past contestants are claiming really happened on the show. A “no comment” would have been just as effective.