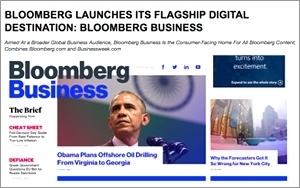 The new site is designed for mobile consumption, with a modular layout that allows editors greater flexibility in formatting and presenting content. It draws on editorial resources from across the media company, including Bloomberg News, Bloomberg Businessweek, and Bloomberg TV, as well as its digital video division.

On the advertising side, the site debuts with support from Microsoft as its global launch sponsor, including a homepage takeover unit on Bloomberg Business and a “checkerboard” ad unit due to appear in February.

As it seeks new audiences, Bloomberg has been creating a portfolio of digital news brands around different topics, including many outside its traditional bailiwick of business information. Last May, it launched Bloomberg Politics, a multiplatform political news hub devoted to national and state politics, including a new TV program, “With All Due Respect,” airing on Bloomberg TV and live streaming on BloombergPolitics.com.

In the same vein, the company is planning to introduce a series of new media brands, including Bloomberg Markets and Bloomberg Technology, as well as a luxury media brand, Bloomberg Pursuits.

These channels are currently operating as adjuncts to Bloomberg Business, but will eventually become full-fledged brands like Bloomberg Politics.