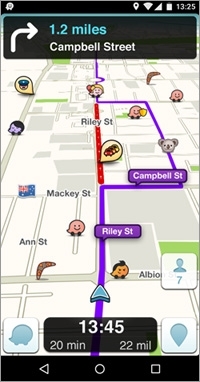 Real-time traffic reporting has made Google-owned Waze popular with drivers, but law enforcement questions the importance of being able to track police officials. It not only puts their lives in jeopardy, but could derail any undercover operations in the works. Real-time reporting may be important when tracking traffic to determine congested areas or for consumers who opt-in to ad targeting for specials and coupons, but it's not always a positive feature when it comes to tracking the whereabouts of police.

L.A. Police Chief Charlie Beck expressed the sentiment in a letter to Google. The concerns address the ability to report the whereabouts of law enforcement. In the letter, he asked to speak with company officials to ensure the app is not misused to target officers.

Beck told the L.A. Times: "It is not always in the public’s best interest to know where police are operating."

As reports of concerns increase, Waze defends the feature, saying that many in law enforcement support it because "most users tend to drive more carefully when they believe law enforcement is nearby." Some don't think Waze officials consider the consequences for law enforcement.

Julie Mossler, head of global communications for Waze, said that company officials are concerned about safety and security, and work closely with police and transportation departments worldwide. "These relationships keep citizens safe, promote faster emergency response and help alleviate traffic congestion," she said. "Police partners support Waze and its features, including reports of police presence, because most users tend to drive more carefully when they believe law enforcement is nearby."

Meanwhile, there are no statistics that prove that the feature in Waze reduces crime by giving the general public the ability to track law enforcement. Some law enforcement officials say the Waze executives making the decision to keep the feature do not think like criminals, which can present issues for the officers.

"What about the safety of the officers?" asked one law enforcement official.

While Waze's Mossler might believe in the statement, many law enforcement officials do not support reports of police presence, which can hinder undercover operations and investigations.