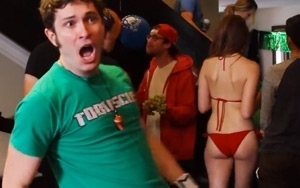 YouTube plans to make the Super Bowl halftime show the ultimate in entertainment and advertising by leveraging stars, personalities and more than 115 Super Bowl ads and teasers that brands have been posting to Google's video so far this year. At present, the count is up 80% from the same time last year.

Overall, the video ads have been watched more than 80 million times -- up 75% from last year -- but the real test for Google's YouTube will come Sunday during the halftime live streaming event on Sunday.

Rebecca McCuiston, SVP of influencer marketing at 360i, said YouTube attracts a younger group, which ties into the programming and celebrities they have lined up. "It creates talkable moments," she said. "They're not just social celebrities, but each has their own YouTube channels."

McCuiston said YouTube is looking for the second-screen audience.

"This is the first year the Super Bowl will be streamed for free, so it makes sense Google would use the half-time bonanza to promote YouTube talent," said Rob Griffin, EVP global head of digital media at Havas Media."It's still rumored that Google wants the NFL Sunday ticket for YouTube. They lost our last year to DirecTV, but I hear they still want it."

Griffin said it's a sign the industry hit a crossroad or a tipping point with regards to the second screen, but unless you are an unfortunate traveler on the day of the big game, you will probably end up in front of a big screen somewhere.

"It's especially telling since there has been a lot of press lately about wasted ad dollars if you advertise during the big game," Griffin said. "I don't expect to see a massive shift in spend as a result of this move."

Ad fans have journeyed to YouTube watching more than 100 million minutes of Super Bowl ads this season, up nearly triple the amount of minutes watched at the same time last year. While the top ads come from a range of advertisers, newcomers and regulars, puppies, pranks, and Kim Kardashian continue to break records.