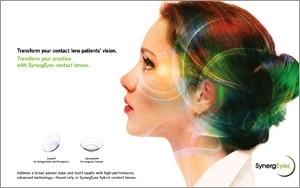 More than 30 million Americans wear contact lenses, according to the U.S. Food & Drug Administration, yet there hasn't been much lens innovation in the past couple of years. Soft contact lenses, for instance, were introduced in 1971. Now, SynergEyes, Inc. hopes to revolutionize this industry with its line of so-called “high-performance” contact lenses and is launching  a new campaign to support it.

Developed by DevicePharm, an agency that specializes in medical advertising, the new "Transform" campaign illustrates what the company says are the unique and life-changing benefits of SynergEyes advanced technology contact lenses.

The ads are designed to be dramatic, eye catching and aspirational and highlight the following message: "Transform your contact lens patients' vision. Transform your practice with SynergEyes contact lenses."
Importantly, the creative is aimed at both eye care professionals and their patients and covers SynergEyes various sub-brands, including Duette, Duette Progressive, and UltraHealth, which deliver solutions for astigmatism, presbyopia and irregular corneas. The key challenge of this campaign was to convey messaging that resonates both with eye professionals and patients, as well as extend to individual brands, according to the company.

This multi-faceted messaging represents a new direction for the privately-held SynergEyes. "The campaign moves away from communicating company facts and embraces an approach focused on the benefits to the patient and the eye care practice," says Louise Curcio, VP Marketing, SynergEyes. "Additionally, the look and feel of the campaign supports the 'advanced technology' positioning of the company."

The campaign launched in January 2015 with ads in optometric industry publications such as Optometric Management, as well as at the Global Specialty Lens Symposium (GSLS) trade show in Las Vegas held January 22-25. The campaign is now extending to social media, particularly Twitter and Facebook.
SynergEyes has been working with DevicePharm for over six months. While executives decline to specify ad spend, they say its budget will increase in 2015 from 2014.