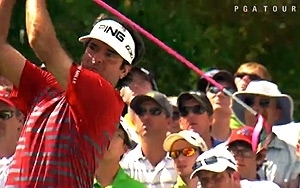 As the PGA Tour continued last weekend in Scottsdale, Ariz., tour organizers wanted people to know the athletes are as dynamic and disciplined as those who played a few miles away in the so-called "Big Game."

A new round of advertising for the tour showed off the work and dedication the professionals competing for the FedExCup have for their sport. Timed to launch during CBS Sports coverage of the Waste Management Phoenix Open last weekend, the first commercial included clips of reigning champ Justin Rose, as well as golf notables such as Bubba Watson, Billy Horschel and Tiger Woods.

“The idea is to take the personality of our players and combine it with the PGA landscape [to show] what happens on tour week in and week out,” Ty Votaw, the PGA Tour’s chief marketing officer, tells Marketing Daily. “We believe this campaign effectively portrays the excitement of the PGA Tour and helps to highlight our players in a unique way.”

The spot, from agency GSD&M, begins with actor Luke Wilson (who last year provided the voiceover, but makes a physical appearance this year) rhetorically asking if the guys on the tour have it made. “It’s all red carpets and limos? Well, why don’t you ask this guy,” as the visuals cut to a sweat-covered Rose running to stay in shape. As the video cuts to the other golfers sinking huge putts and big drives, Wilson likens the tour to “swimming with sharks.” The spot ends with the tagline, “These guys are good.”

Having noted golf fan Wilson appear (rather than merely as a voiceover) lends an extra layer of authenticity to the campaign, Votaw says. “We think it brings an energy to the campaign, and lends a face to the voice,” he says. “He adds humor and personality.”

Other commercials in the “This Guy” campaign continue to roll out over the first quarter of the PGA Tour, he says. The PGA will also run the commercials on its social media channels.

“We want to make sure we expand exposure to other platforms so that every fan that engages with us will have a chance to see these spots,” Votaw says.