Half Of Americans Watch Super Bowl For The Ads 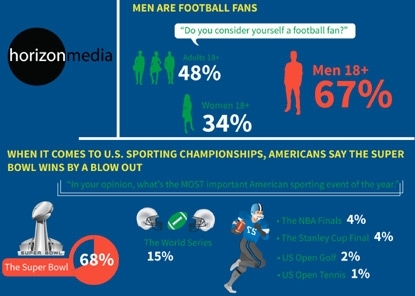 Forget the battle between the Patriots and the Seahawks; nearly half of Super Bowl viewers (47%) are actually watching the game for the commercials, according to Horizon Media's Finger on the Pulse survey.

Women are more likely to say they watch for the ads (52% of women vs. 41% of men) but 31% of both genders say they watch what happens outside of the game because “it’s a tradition.”

“It’s clear support for why advertisers continue to make big investments in the Super Bowl," says Kirk Olson, VP of Trendsights at Horizon Media. "On top of the enormous reach, Americans still very much believe in the event as a sports and advertising tradition.”

Indeed, Americans actually expect advertisers to be involved in the event. When asked which professional sporting championships advertisers should be a part of “in order to be relevant,” more than eight in ten (84%) chose the Super Bowl, compared to 66% who say The World Series and 35% the NBA Finals.

“Advertisers have changed their approach to the event," says Olson. "For example, early releases of spots online show they treat it less like an opportunity to 'premiere' a new ad. Today, it’s even more of an opportunity to get people talking. It only makes sense to get them talking early and across media channels.”

Nonetheless, despite the flurry of creative spots, 58% say they watch the Super Bowl because “I’m a football fan." Yet compared to last year, slightly fewer people say they will watch the game (55% vs. 63%). Two in three Millennials (63%) expect to watch this year, compared to 51% of people between the ages of 35 and 49 and 54% among those who are 50 to 64 years old.

“It’s no secret that the NFL has had some PR trouble lately," says Olson. "The fact that intent to view is still as high as it is this year shows people’s passion for the event. That bodes well for advertisers who have allocated precious marketing dollars for a Super Bowl buy.”

Americans are increasingly extending their viewing habits beyond the big-screen TV. This year, 33% say they will use social media while they watch the game, compared to 26% last year.

“Mobile and social usage is great news for advertisers who didn’t invest in a 30- or 60-second spot because they can use other media channels to join the party," says Olson. "With so many Super Bowl viewers saying they’ll have a secondary mobile screen in hand, the big screen won’t be the only way to get an advertising message across."

It seems viewers don't really care who ultimately wins the big game. When asked to choose from a list of reasons why the Super Bowl is most important, 82% agree that “It’s the event people gather to watch in groups," 79% say “People talk about it a lot during and/or after,” and 78% say “It’s the event with the best ads.”

advertising, research, super bowl, tv
2 comments about "Half Of Americans Watch Super Bowl For The Ads".
Check to receive email when comments are posted.
Read more comments >
Next story loading