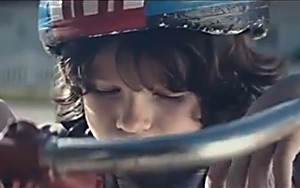 Negativity doesn't sell, according to Super Bowl viewers. Nationwide's "Dead Kill" ad -- which featured a boy discussing things he would not be able to enjoy because he is dead -- was voted as the worst Super Bowl ad, according to digital marketing agency Prime Visibility.

GoDaddy's straightforward "Hardworking Guy" spot was also strongly disliked, although a lot of the backlash was due to the previous commercial they aired with the puppy that was swiftly pulled.

Snark may have also torpedoed Mercedes in winning over viewers. The CGI-created spot showed the tortoise beating a cocky hare, thanks to a Mercedes, but this ad from the luxury car brand ranked as the third-least-favorite ad, according to the report.

"A lot of people exclaimed that they didn't want to be depressed for the Super Bowl," says Prime Visibility's Dave Neuman.

Meanwhile, Budweiser's Best Buds -- which featured Clydesdale horses protecting a puppy from a coyote -- captured viewers' hearts to rank it as the best Super Bowl spot, followed by the eSurance ad that resurrected Breaking Bad's Walter White to rank as the second-favorite ad, followed by Snickers' "Brady Bunch."

"Part of Budweiser's and Snickers' success lie in the fact that they released their commercial pre-Super Bowl," says Neuman. "They were such great commercials that once they aired again, people were excited to see it again."

Overall, there seemed to be a little less conversation around Super Bowl ads than last year. Sixty-five percent of people thought the commercials were disappointing this year, compared to 35% who thought they were satisfactory or above average.

"A lot of users were disappointed with this year's commercials, since there were fewer 'funny ones' than what you typically see at the Super Bowl. That, along with the fact that less companies were using hashtags in their ad likely had an impact on the volume of conversations," says Neuman. "Whether this is a sign of a new trend or just a fluke? While it's tough to predict, I think it's just a fluke. If you look at overall social engagement in general, it's growing every year, which leads me to believe that social chatter for major sporting events should also increase each year. Brands just need to step up their game in 2016!"

One reason for the lack of viral chatter is that fewer brands seemed to integrate "hashtags" into their ads. Nonetheless, the top-trending hashtags were #superbowl, #sb49, #empowering, #bestbuds, and #likeagirl.

While New England and Seattle fans focused on their teams’ performance on the field, the top cities discussing the commercials were New York City, Los Angeles and Chicago, respectively.

Millennials were the age group most likely to use social media to chat about the ads, followed by Generation Xers and then Baby Boomers.

While there were many disagreements over game play and the halftime performance, there were two things that all ages and cities could agree upon. Their favorite and least favorite ads didn't vary across the different age groups and cities.