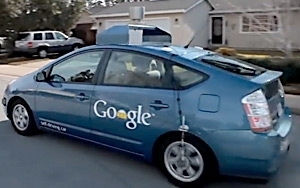 Google's venture capital arm, Google Ventures, invested $258 million in Uber in August 2013. Now the companies could become competitors. Google is preparing to offer its own ride service using its driverless cars, per one report. David Drummond, Google's chief legal officer and senior vice president of corporate development, has informed Uber's board that this might happen, according to a person close to the Uber board, reports Bloomberg.

The data signals that autonomous cars will send and receive, and information each collects, will become common-- identifying everything from speed, turns, locations and obstacles to roadside stores, and signs. While the data could be used to refine and monitor the technology, future cross-channel marketing strategies could easily pull in that data, and even make it anonymous per location.

The paper describes ways to resolve future challenges through technology, connected vehicles, automated transportation, and trends that will shape the economics of transportation and freight movement through 2045.

The study also discusses the impact of change, higher temperatures due to more congestion, severe weather and rising sea levels.

"Many expect a tiered roll-out of vehicles as driving functions are increasingly automated over the next decade. Vehicles that can apply emergency braking or keep a driver in their lane are available now," per the study. "Automated driving on limited-access highways could be an option on luxury vehicles in several years. Full automation, where a driver no longer has to steer or adjust speed, could be commercially available within the next 20 years."