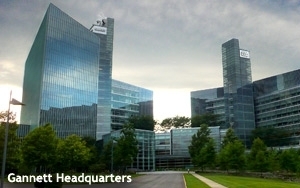 Gannett Corp.’s TV operations saw a sizable jump in revenue in their fourth-quarter results due to its significant Belo Corp. and London Broadcasting acquisitions.

Revenues grew 117% to $495.3 million during the period without accounting for the TV stations' purchases (on a pro forma basis). Revenue was up 25%.

Core and national TV spot advertising were up 63% to $275.9 million over the same period a year ago, but down 7% on a pro forma basis.

Retransmission revenue improved 142% (and 56% pro forma) to $94.3 million. Political advertising during the fourth quarter was at $92.4 million, with no comparable 2013 fourth-quarter results.

Gannett expects first-quarter 2015 advertising to be higher in the low-to-mid single-digit percentages — all this against a $41.3 million gain from the Winter Olympics in the first-quarter 2014.