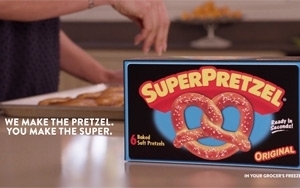 In today’s world of crazy schedules and social media mania, Superpretzel and branding agency 160over90 are introducing a new campaign that seeks to trigger feelings of nostalgia and return to simpler times.

"We adopted a back-to-basics brand stance that cuts busy moms a break, inviting them to make food the whole family likes to eat, and freeing up time for good old-fashioned fun," says Cory McCall, Creative Director, 160over90.

This is the first time the pretzel brand has launched a targeted, emotional appeal nationally, says McCall. "The new ‘We Make the Pretzel. You Make the Super.’ campaign takes a direct shot at today’s over-the-top, overly crafted rituals of showing off and documenting the food we make, rather than enjoying it – and, more importantly, enjoying time with our family."

The ad - airing nationally on Nicktoons, Nick Jr., Hallmark, and other family-centric channels – uses imagery to illustrate just how frenzied snack time has gotten with today's families. It shows overelaborate meals and the tendency to post them on social media. The spot ends with a narrator saying “Because at the end of the day, the only ‘likes' that really matter are thumbs up from your little ones.” The ad can be seen here.

While other family-friendly brands struggle to balance between marketing to moms or kids, McCall said  it was a simple decision for this campaign. "We have a lot of experience differentiating between the consumer (kids and families, in this case) and the purchaser (moms)," says McCall. "Moms are the ‘gatekeepers’ of the foods purchased for the household, so our approach with this campaign was to appeal directly to them. We’re reminding them of Superpretzel's simple ingredients, ready in seconds, but we’re also letting them know that – with all of the societal and social pressures to be the ‘perfect parent’ – they’re doing a super job."

160over90’s partnership with Superpretzel began in early 2014. The account is serviced out of 160over90’s Philadelphia office.