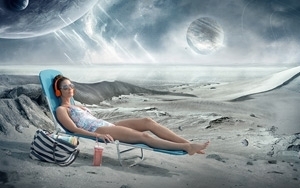 While 14% of Americans listen to audio books, according to the Pew Center, there are millions of readers who are unfamiliar with this platform.

Now Audible, Amazon's audio producer and retailer, and digital agency Firstborn are launching a new campaign to reach those who have never downloaded an audio book.

The "Stories That Surround You" campaign is designed to highlight the immersive experience of listening to audiobooks and showcase the more than 180,000 audiobooks and other spoken-word programs available via Audible.

"With this campaign, we wanted to clear up the misconception that audiobooks are only ideal when you need to be hands free, like on a road trip or your daily commute," says Seth Tabor, Executive Producer, Content Development at Firstborn. "Their convenience certainly makes reading easier, but Audible’s narrators actually enhance the experience and can transform the simple act of reading a book to something more immersive."

The concept conveys the cinematic allure of listening to audiobooks. "We needed to demonstrate this cerebral experience of being surrounded by a story, so we visually constructed the listeners' imaginations and used real Audible narrators to give the audience a taste for how Audible can bring stories to life," says Tabor.

Firstborn handled all production; VFX and CGI were "heavily incorporated" to take each story to the next level. The videos were shot over three days across seven locations with over 200 cast and crew.

"By showing listeners so transported by their audiobooks that they actually become surrounded by the characters and the scenes from the stories they’re experiencing, the campaign underscores the uniquely cinematic nature of the medium," says Matthew Thornton, senior director of Communications at Audible.

"Our customers often tell us that listening to audiobooks is like theater for the ears, and the 'Stories That Surround You' campaign conveys the power and intimacy of the Audible experience in a way we think will compel a new generation of listeners," he adds.

The effort includes radio, digital and print, with the central focus being an online video in :15, :30 and :60 versions running across Hulu, CNN, Yahoo, AOL, MSN, AMC, Tremor, and YuMe video networks. The :60 version of the video link can be seen here.

The campaign also appears in radio ads via Sirius, Spotify and Pandora, print ads in the New York Times Book Review and New Yorker magazine, and digital media running across desktop, display, and mobile channels. Later this year, the campaign will expand to broadcast TV.

Firstborn initially teamed up with Audible last summer to create a video that brought its WhisperSync for Voice product to life via racy excerpts from the popular Outlander series by Diana Gabaldon."The content received great reception on social media, so they brought us back to create a larger brand awareness campaign," says Tabor.