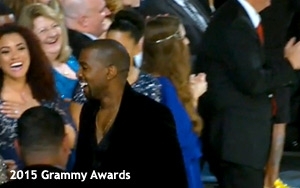 Singer Sam Smith was the biggest winner during the Grammy Awards Sunday, but Kanye West won the night in terms of social media, according to Amobee Brand Intelligence.

West generated 948,181 Tweets during the event thanks to his solo performance, collaboration with Rihanna and Paul McCartney and with his almost interruption of Beck that was reminiscent to his 2009 upstaging of Taylor Swift during the MTV Music Awards.

Sam Smith received 754,641 Tweets, and Rihanna had 446,013 during the broadcast. Rihanna was one of the few performers who attracted a wide range of discussion aside from her FourFiveSeconds collaboration.

Tthere were 35,974 Tweets discussing her dress and another 18,946 Tweets that referenced her ex-boyfriend Chris Brown.

Three of the seven least talked-about performers were country stars. Miranda Lambert, for instance, had 24,147 Tweets around her performance; Eric Church had 16,758 and Brandy Clark was dead last, mentioned on Twitter just 2,493 times during the broadcast.

At the same time, Grammy TV ratings were down 11% from a year ago, the lowest they’ve been since 2009, which Amobee Intelligence suggests may be linked to this tepid social media chatter.

"Country fans are usually very supportive around watching their favorite acts on awards shows; if the Grammys are going to improve their ratings, in the future they have to do a much better job in courting Country music fans," according to the Amobee report.