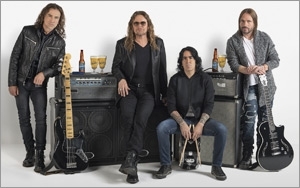 A beer that only recently began distribution in the U.S. will be the official Mexican beer sponsor for Maná’s upcoming concert tour.

The Mexican lager is backing the nationwide concert tour set to begin in June 2015.

This beer began distribution in the U.S. in late 2014 via Grupo Modelo. Montejo is available in bars, restaurants, and in retail stores in California, Arizona, New Mexico, Texas, Florida, Colorado and Nevada. Distribution will continue to expand across the country this year, says Ryan Garcia, vice president of regional marketing for Montejo.

The sponsorship aims to create a memorable experience that makes the band’s loyal fans feel like they are getting an authentic taste of Mexico no matter where the tour stop might be, Garcia says.

“Montejo will be seen in videos filmed throughout the concert series as well as behind the scenes video content that will prominently feature band members toasting with Montejo,” Garcia tells Marketing Daily, adding that the band’s members will drink the beer on stage.

The sponsorship includes branded VIP areas at each concert stop, a consumer promotion where one fan will win a one-on-one experience with Maná, branded visibility in Maná music videos and a live concert event set to take place at a brewery in Mexico later this year.

“We will also be releasing digital video content on Montejo’s social media platforms to further promote the partnership,” Garcia says.

The partnership targets consumers who proudly celebrate their Mexican heritage and embrace it unapologetically every day, he says.

“Maná connects with fans in the U.S. and abroad with music and lyrics inspired from Mexican life experiences; their influence on rock en español is a great example,” he says.

Montejo’s core consumerare Mexican and Mexican-Americans in the U.S. and abroad. Overall, the Montejo drinker is someone who values tradition and maintains their cultural heritage, Garcia says.

The golden lager, which is more than 100 years old, was created in Cerveceria Yucateca, S.A. in Merida, Yucatan by Jose Ponce Solis. Some of Montejo’s primary competitors include Corona Extra, Modelo Especial and Dos Equis.

The Maná tour is the first major marketing sponsorship the brand has undertaken in the United States.

“This partnership seeks to bring an authentically Mexican experience to loyal Maná fans attending their concerts this summer,” Garcia says. “Ultimately, while Montejo isn’t the first Mexican beer imported to the United States, it will be the only one genuinely representing Mexican heritage and authenticity in the United States.”