NBA, Knicks, And Brands Mix It Up In New York For All-Star Weekend 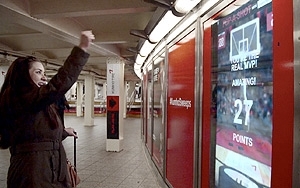 The NBA, the Knicks and the many sponsors of the NBA All-Star Weekend activities, such as Kumho Tire, are heating things up around the city and at Madison Square Garden and Barclays Center all this week and next.

The Knicks have converted Lugo Cucina Italiana on 33rd Street between 7th and 8th avenues in Manhattan into an All-Star experience and renamed it “The NYK at Lugo Cucina.” This week the restaurant is home to events for Knicks sponsors, season subscribers, and suite holders. MSG marquee partner Chase, as presenting partner of the NYK at Lugo Cucina, has its name on the marquee and inside, and gets hospitality events there for stakeholders all week.

Anheuser-Busch — official spirits partner, and a sponsor of Madison Square Garden — gets its Mixx Tail product name on the restaurant bar, and A-B products are be part of the restaurant’s week-long prix-fixe menu.

In another part of town, Korea-based Kumho Tire has taken over a big chunk of the Times Square subway station and several shuttle trains as well. The effort — via creative agency Los Angeles-based Trailer Park, and Fairfield, NJ-based Pearl Media, and running through Feb. 22 — centers on an interactive basketball “Pop-A-Shot” game featuring Carmelo Anthony. The game, on interactive screens set into a storefront wall — and framed and promoted by posters, column wraps, stair-step signage and turnstile wraps— is a modified version of hoop-shot kids game h-o-r-s-e. But instead of a ball, participants "toss" virtual Kumho digital tires into a video hoop using a swipe of the finger. An inset camera allows visitors to pose for a photo with Anthony, which can then be shared on social media.

Kumho Tire’s U.S. marketing director, S.B. Kim, tells Marketing Daily that the company's focus on the NBA and its D-League, a three-year partnership in its second year, gives it a brand awareness boost it wouldn't get with the usual team-specific relationship. “We are a global brand, and in the U.S. the NBA is a formidable entity.” Part of Kumho's All-Star week activation is integration with the D-League All-Star Game on Feb. 15 at Barclays Center, he says. Kumho Tire will have branding covering the entire court, and will participate in the half-time, where it will have, among other things, its mascot cavorting about the court.

Kim says the brand will also have a presence at next year's All-Star Game in Toronto, and is doing year-round activities as part of its sponsorship of the D-League. “We will be doing different promotions as part of that all year,” he says. Pearl Media says the game has garnered about a 53% click-through rate since launching on Jan. 28, with about 2,850 playing the game.

Major league sports activation at a national level is a white space for the category, he notes. “Our brand awareness is low here, so this gives us a strong chance to grow with people who have a passion for sports.” The target, he says, are 18 to 35 year olds, “which is why we are also focusing on social media, and on new media for these kinds of fun promotions.”

Kumho Tire is also part of “NBA House at Moynihan Station,” a 70,000-square-foot experience, presented by BBVA Compass, that includes courts, interactive exhibits and other brand activations. The installation, at the Skylight in the Farley Post Office across from the Garden, includes a Knicks-hosted evening on Feb. 11 for some 3,000 season subscribers, suite holders, and sponsors. Kumho Tire is also there as sponsor of the NBA Fit Court.