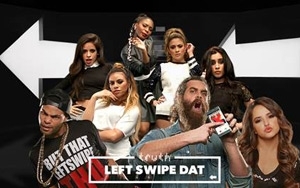 When agency 72andSunny landed the American Legacy Foundation's truth account in March, executives reset the long-running campaign in order to connect with the next generation of teens.

Out went the shocking images of longtime smokers damaged by their habit and behind-the-scenes look at the tobacco industry, replaced by celebrities with an anti-smoking message.

Now, the campaign is rolling out “Left Swipe Dat,” a new music video featuring what today's teens consider celebrities -- YouTube and Vine influencers -- to serve as a social attack on tobacco.

"A key part of our strategy is to shine a light on that fact that smoking is no longer attractive," says Nicole Dorrler, vice president, marketing, Amercian Legacy Foundation. "The influencers, celebrities and musicians in 'Left Swipe Dat' believe in creating the generation that will end smoking. Many of them had a personal connection to the cause. ”

Adults aren't likely to know any of these personalities. The video's concept is based on the agency's research that reports that people are more likely to “left swipe” (reject) a person if they are shown smoking in a profile picture.

Through this initiative, 72andSunny is helping truth be social, as well as socially relevant, by creating content that resonates with young social media users by running the content across social media channels.

“We were lucky to have chosen an agency that is right in sync with us especially when collaborating on the challenge to stay one step ahead of culture in a relevant manner," says Dorrler. "We have a constantly evolving target in a dynamic media landscape.”

Launched in 2000, the American Legacy Foundation's truth campaign is the largest anti-smoking initiative aimed at teens. During its two-plus decades in operation, the foundation has been funded almost entirely from the billion-dollar settlement payments under 1998 Master Settlement Agreement (MSA) between the states and the tobacco industry.

However, due to an effective sunset clause in this funding, they have had to do more with less funding over the past few years. The foundation spent $28.8 million in 2014, down from $38.98 million in 2013 and significantly down from $104 million spent during its first year.