Durant Makes The Case For Sprint 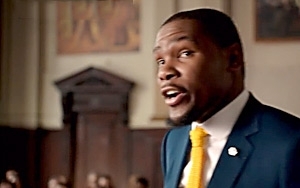 Kevin Durant may not be an attorney, but he’s playing one on TV. And he knows his way around a (basketball) court.

In a spot timed for the NBA All-Star game, the telecommunications company puts the Oklahoma City Thunder forward in the role of an attorney, making a case for Sprint’s “Cut Your Bill in Half” promotion.

In the spot, Durant defends a hapless customer who says she’s paying too much for her wireless coverage, even though she agreed to the contract. Using basketball analogies (“it’s like not getting weak side help on a backdoor screen”), Durant asserts that “no one should be paying these prices to call their mother.” Durant handily wins the case, demanding a great rate plan at half the price.

“We’ve had a long-standing relationship with Durant, and we’ve always tried to get bigger and better,” Tracy Palmer, director of Sprint brand and advertising, tells Marketing Daily. “When [the agency] came back to us with the idea of putting him as an attorney on the side of the people, we thought it was something special.”

The company and Durant had been alluding to the spot (created by New York agency Translation) on social media for several days leading up to the All-Star game. It will continue to run in 30- and 60-second versions over the next few weeks. The courtroom spot will be augmented by another commercial that sees Durant soliciting customers like many other attorneys. The spot features a toll-free number to call, which is answered with a message. The second spot will run primarily during late-night programming. Palmer stressed that Durant isn’t a real attorney, however. “He’s a character we’re using in a commercial to communicate our message,” she says. “But he’s still Kevin Durant.”

The campaign marks the fourth year in a row that Durant has appeared as a spokesman for Sprint’s advertising. Last year, he appeared in a sport that featured the ill-fated Frobison family, and had previously appeared in a spot touting the company’s unlimited data plans.

The “Cut Your Bill in Half” promotion, extended to AT&T and Verizon Wireless customers, has been positive for the company, which has seen increased traffic in its stores and the highest number of gross post-paid (i.e., contract) customer additions in three years, according to its most recent quarterly earnings reports.

“It’s important,” Palmer says. “As recently as this week, we’ve been getting strong markets for the advances we’ve been making to our network.”