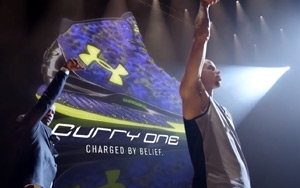 You can pretty much count on leaving an Under Armour press conference and its celebration of athletic heroism feeling like a terminal underachiever. But the company’s Thursday night event in New York to debut a new global ad campaign and launch its first basketball shoe took it to a new level. There's a scene in Woody Allen's “Sleeper” in which Woody Allen, tired of Diane Keaton's endless lionizing of her super-achieving boyfriend, says “Yes! But can he do this!” and performs a ridiculous pirouette.

Several reporters did that very move, if only mentally, after an hour of mutual admiration and Nietzschean bromance between Under Armour CEO Kevin Plank and entertainment polymath Jamie Foxx. The latter was in the house as surprise guest because the actor, comedian, musician, singer, athlete, businessman and now philosopher is the star, creative director, and spirit behind the brand's biggest global campaign to date.

The effort, “Book of Will,” comprises a set of short films with an underdog-as-Übermensch zeitgeist that couldn't have been better expressed by Leni Riefenstahl herself, if she were directing Foxx. The theme is underdogs rising through sheer will to dominate, defeat and rule.

One of the new ads, for UA SpeedForm Gemini and UA SpeedForm Apollo Vent running shoes, features U.S. track and field athletes Manteo Mitchell and Natasha Hastings. In it, Foxx munches the scenery, looming large, even upstaging the athletes at times, his image at one paint sprayed across the side of a building as he bellows about how Aristotle got it wrong that “We are what we repeatedly do.” (Actually it would be Will Durant getting it wrong, since he's the one who said it.) The takeaway is that athletes have to “repeatedly do” when things get hard.

Another ad, marking Under Armour’s entry into the basketball shoe category with a hightop bearing the name of NBA All-Star and Golden State Warriors player Stephen Curry, has Foxx correcting Shakespeare. The ad for the “Dark Matter Curry One” shoe, to air on Feb. 15 during the 2015 NBA All-Star Game, focuses little on the shoe and mostly on second-time All-Star player Curry as “The Patron Saint of Underdogs.” As Curry shoots long shots on a Broadway stage Foxx “struts and frets his hour upon the stage,” as it were, clamoring about Shakespeare getting it wrong that men and women are merely players. “Shakespeare never met Stephen Curry,” he barks.

At the Thursday night event, Plank and Foxx talked about how they met, and their years-long friendship that started with a jockstrap. Evidently, when Plank got his big break making jerseys for the gridiron film “Any Given Sunday,” one of the scenes involved Foxx wearing a UA-branded jock. Since UA didn't make jocks they had to throw together a one-off, which Plank helped sew.

Plank said his company passed $3 billion in global sales last year and the fifth consecutive quarter of top-line growth, and 19th of 20% or more revenue growth. He also spoke about the company's digital ambitions to expand its product strategy to include -- or maybe become defined by -- smart, connected gear and apps to make the company the “dashboard of your life” for health and fitness. In 2013 the company acquired MapMyFitness for $150 million; in January, UA debuted Its own UA Record app at CES; and this month the gear maker acquired two more apps: MyFitnessPal and Endomondo, for $560 million. “We are a digital company,” he said. “And we have doubled down on that.”

He said MyFitnessPal now has over 30 million registered users, and that with all of the apps, the company has 120 million registered users. He said in January alone 136,000 people per day downloaded one of these four apps and one in five Americans has one. He added that the company has also vastly expanded its in-house digital expertise. “Two years ago we had less than 50 people between e-commerce and digital. Now we have 400.”

On the retail front, UA has begun expanding its “brand house” spaces. In addition to the flagship at the company's hometown in Baltimore, at the harbor; a store in New York's SoHo district; a pair in Abu Dhabi and Dubai; the largest, at 30,000 square feet, is opening on Michigan Avenue in Chicago next month.