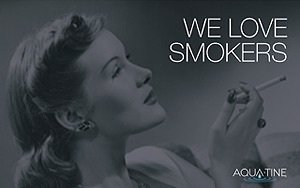 Now, the Aquatine Group has selected StrawberryFrog as its advertising partner covering branding and marketing campaigns in social media and digital platforms.

“StrawberryFrog have a world class reputation for strategy, creativity and social media and we feel their appointment will add real drive to our marketing campaign," says Aqua-Tine CEO Walker Grant.

This appointment was driven by Aqua-Tine's heightened profile and its desire to support its product with  increased marketing support and planned retail expansion. The product meets the Food and Drug Administration (FDA) requirements for over-the-counter (OTC) homeopathic drug products which the company said helps differentiate it from some competitors or rival methods.

This week, Aqua-Tine and StrawberryFrog are introducing the "We Love Smokers" initiative which aims to build a unique connection with the target audience of smokers, especially female smokers who are looking for a cleaner, homeopathic, non-toxic way to stop their cigarette cravings in situations where they are unable to smoke, such as in front children, at work or on an airplane.

"We Love Smokers’ is saying we should not shame smokers or look down at them or make them feel bad. Rather we want to give them a big compassionate, non-judgmental hug right as the craving hits," says Scott Goodson, Founder of StrawberryFrog. "There's a lot of tobacco alternatives out there but none that will love you the way this brand does."

Company executives decline to specify ad budget. Founded in 2012, Aquatine Group is a privately held and operated company based in Montgomery, Alabama.