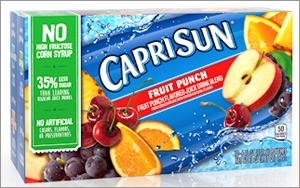 The brand is doing the same with its low-calorie flavored-water line, Roarin Waters. In those products, sucralose is also being replaced with stevia extract.

The reformulations were made in response to input from parents, according to Greg Guidotti, Kraft's senior director for ready-to-drink beverages.

In the case of the flagship line, it is also a return to the original formulation, which was sweetened with sugar, Guidotti says. Capri Sun has also "always been free of artificial colors, flavors and preservatives," he says. "We want to be in line with the product's [all-natural] original promise."

Kraft is also claiming that regular Capri Sun now has 35% less sugar than other leading juice drinks (since 2008, it's been claiming 25% less sugar), and emphasizing that the reformulation reduces the calories in a six-ounce serving by 10, to 50 calories — a change it says will take more than 25 billion calories out of the marketplace each year.

Launched in 1969 by German company Rudolf Wild GmbH & Co. KG and introduced to the U.S. in 1981, Capri Sun was the first national 100% juice brand in the U.S. Kraft licensed the North American rights to sell Capri Sun in 1991 and the brand became the U.S. market leader in 1994, according to Wild's Web site. Kraft subsequently launched Capri Sun product extensions including Roarin' Waters, 100% Juice and Super V vegetable and fruit drinks.

But Capri Sun's sales have slipped in the past few years (down 8%, to $713 million in 2013, in retail outlets tracked by IRI), in part due to increased competition.

Last spring, after finding that social media was greatly amplifying conversations around instances of mold found in the pouches — a natural result of the drinks being preservative-free — the brand introduced clear-bottom pouches.

The development also caused the brand to increase its research and engagement with moms, and to realize that the brand had been under-leveraging the selling point that the drinks have no artificial preservatives, colors or flavors.

A new campaign stressing that benefit was introduced along with the clear-bottom pouches, including a TV spot in which two moms win kids' "cool" approval for distributing the drinks during a bus trip.

The brand spent about $45 million on marketing last year, according to industry reports.

Guidotti  reports that the brand will maintain last year's "stepped-up" marketing spending in 2015, and that it's working with McGarry Bowen Chicago on another new campaign, to be introduced in April (a bit earlier in social media).

The new campaign will retain some of the brand's recent years' positioning as a "catalyst for active play" — Capri Sun is a Major League Soccer sponsor — but focus primarily on increasing awareness among moms of the brand's natural ingredients and lowered-calorie benefits, Guidotti tells Marketing Daily.

In addition, across the Capri Sun portfolio, the outer packaging is being refreshed to emphasize the benefits claims to moms, while the pouches are getting new graphics that appeal to the fun element, for kids, he says.