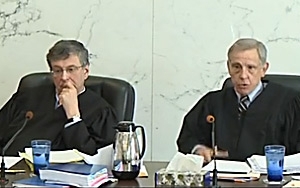 A recent pro-Pandora decision in a privacy lawsuit “guts the protections” that lawmakers intended for consumers, an attorney for Michigan resident Peter Deacon told an appellate court this week.

“This case involves a privacy statute that was written to prevent the disclosure of consumers' deeply personal choices in the books they read, in the movies they watch, and, as relevant today, in the music they listen to,” lawyer Ryan Andrews told a three-judge panel of the 9th Circuit Court of Appeals at a 30-minute hearing Wednesday in San Francisco. “The Michigan legislature clearly would have considered the disclosures by Pandora to be covered by this statute.”

The battle dates to 2011, when Deacon alleged in court papers that Pandora's integration with Facebook violated Michigan's Video Rental Privacy Act. That law prohibits companies that rent, lend or sell music (as well as books and videos) from disclosing customers' identities without their consent.

Facebook's earliest iteration of its “instant personalization” program, the company automatically shared logged-in Facebook users' names and photos with outside companies. That program was launched on an opt-out basis.

Armstrong dismissed Deacon's lawsuit in 2012 on the grounds that Michigan's privacy law -- which is more than 20 years old -- doesn't apply when companies stream tracks. She said the law only applies to companies that lend, rent or sell material.

Deacon is appealing that decision.

“What Pandora's doing can be construed as lending,” his attorney argued to the panel. He added that the crux of the ruling -- based on the judge's opinion that “streaming” isn't “lending” --  is “a very dangerous precedent that basically guts the protections that were intended by this law.”

Pandora's attorney, Jacob Sommer, countered that Pandora functions more like a DJ at a party, or a traditional radio station, than a “lending” service. He added that Pandora's doesn't enable users to “borrow” music, as much as “listen” to music that someone else is playing for them.

Judge Paul Huck questioned that logic, saying that a radio station doesn't have profiles of users the way Pandora does. “That's the whole issue,” Huck said. “They know something about you.”