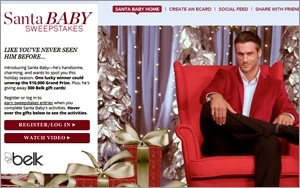 During the holiday season, southern retailer Belk and digital agency HelloWorld ran a revamped version of the brand’s “Santa Baby” promotion that engaged shoppers with contests and holiday messages.

However, unlike their previous efforts, they upgraded the most recent “Santa Baby” initiative by allowing consumers to have more control. Rather than funneling entrants to a one-time sweepstakes entry, shoppers could decide when to register during the promotional experience and upon doing so they were rewarded with additional sweepstakes entries into the Grand Prize drawing.

The retailer deemed the enhancement a success, because this holiday season's Santa Baby” promotion saw the greatest number of email and mobile opt-ins, which was interpreted as increased connectivity and consumer engagement with the brand.

"If a consumer did not want to register, she could still take part in the festivities by creating a Santa Baby eCard to share with family and friends," says Jon Pollack, EVP, Belk. "The flexibility of the promotional experience allowed consumers to interact with the campaign in their preferred method and on their preferred channel.”

Upon the campaign’s conclusion, Belk saw 233,500 total registrations and had over 1.1 million sweepstakes entries stemming from various activities across a specially designed “Santa Baby” microsite. And the campaign generated over 1.6 million personalized eCards, impressive considering eCard creators were not rewarded with a sweepstakes entry. "In particular, the eCard element of this initiative was a hugely successful component, as it invited participants to showcase, and more importantly share with friends, their creativity while playing into the cheeky and fun nature of the campaign," says Pollack. "This is especially important when you consider over 15% of registrations came from referrals."

While Santa Baby is expected to return next year, executives are already incorporating what it learned across other promotional initiatives. "We pay close attention to our results from campaign to campaign and look to weave successful elements into future promotional opportunities," says Pollack. "Routinely, our campaigns perform very well and we’re delighted that this program was so well received."