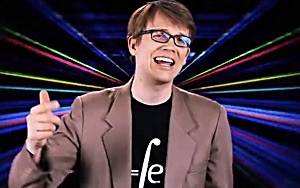 Engineering and technology company Emerson is looking to excite the next generation about the wonders of science, technology, engineering and math (STEM) as if its future depended on it. (Which it kind of does.)

The campaign, which launches with a television commercial during CBS’ “The Big Bang Theory” on Feb. 19, is the centerpiece of the company’s 125th anniversary celebration, and is aimed squarely at getting younger consumers interested and excited about the possibility of a STEM-related career. The commercial features YouTube star Hank Green (known for his VlogBrothers, CrashCourse and SciShow channels with have nearly 8 million combined subscribers).

“We want to get to a younger generation who are our future customers, employees and business leaders [and] foster excitement about STEM,” Kathy Button Bell, Emerson’s chief marketing officer, tells Marketing Daily. “This is about tomorrow and a higher-minded purpose of selling science.”

In the commercial, Green sings a song dedicated to how much he loves science. Against a variety of backdrops, he links various scientific discoveries — from wooly mammoth embryos to televisions and the Internet — to describe how amazing science is. “Exoplanet galaxies, DNA germ theory, relativity,” he sings. “Just take a sec to think about it. How sad life would be without it.” The ad directs viewers to a section of Emerson’s site (www.emerson.com/IloveSTEM) to see why the field is so important. On the site, Green acts as a guide to the various educational pieces on the site, which have included stories covering the science of hip hop rhymes and exactly how many licks it takes to get to the center of a Tootsie Roll pop. (Hint: it’s not three.)

Partnering with self-proclaimed “science nerd” Green, Emerson hopes to inspire the next generation of engineers by connecting science to technological advances and modern conveniences. The campaign is another way Emerson plans to express its core brand idea of “Engineering Full-On,” and build the next generation of scientists.

“Science has an image problem. If we can put a little money behind it with Hank’s personality, we’re think it will go a long way to changing that,” Bell says. “Education is much more valuable when its entertaining at the same time. It modernizes Emerson and makes us more progressive.”

Emerson will alternate the new ad with another ad saluting its employees (which will air on CNBC, Fox News and the Golf Channel) and its currently running “Never Been Done Before” TV, print and digital campaign.