Mercedes-Benz Cooks In L.A., Clocks Out In New York 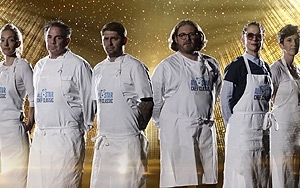 Mercedes-Benz is getting its apron on as exclusive sponsor of the All-Star Chef Classic in Los Angeles. In addition to activating at the event, March 11-14, with loyalty rewards, the automaker will run a ticket promotion leading up to it.

The second annual culinary happening, founded by Lucy Lean and Krissy Lefebvre of Alice in Events, LLC, and run by venue and event leviathan AEG, brings in 25 or more top chefs from the U.S., U.K. and France. At the culinary fair, which happens at AEG’s L.A. Live, across from Staples Center, several programs fill a four-day calendar.

There's a French culinary experience involving a multi-chef dinner with — what else — French wines in front of a live audience and cooked for 270 people paying up to $425 per to partake. A multi-course luncheon features five top female chefs, and a grill-centric, global-themed outdoor cooking program features 10 chefs cooking for 650 guests. Other things include a local-food program for 1,200 guests, and a cookoff. Mercedes-Benz is using its sponsorship both for visibility and as a loyalty platform for owners.

The automaker will offer anyone driving a Mercedes vehicle complimentary parking during the American Masters Dinner and the automaker will have a Mercedes-Benz Owner Private Lounge including a tasting area and private bar. Other sponsors include Stella Artois and Air France.

Vanessa Shay, VP at AEG Global partnerships tells Marketing Daily that the event is less a festival than a boutique program, with most of the All-Star Chef dinners and tastings offering room for 300 people. She says that besides loyalty activations, Mercedes-Benz will have four vehicle placements and brand ambassadors.

She says AEG is promoting the event in L.A. with an out-of-home media campaign, which didn't exist last year. "The 2015 budget let us do a sizable buy."  They include ads on Upfront Media billboards, a buy on L.A. bus transit media, and a series of viral videos on YouTube.

Meanwhile, Mercedes-Benz Fashion Week in New York is just winding down, and so is Mercedes-Benz’s sponsorship of the week-long show, which is also leaving its Lincoln Center home. After a five-year run as sponsor of the biannual program, the three-pointed star will not be back. This company keeps sponsorship of other global Fashion Week shows, of which IMG runs 30 or so around the world. Mercedes-Benz is also pulling up corporate stakes in the Northeast this year, and heading to Atlanta.