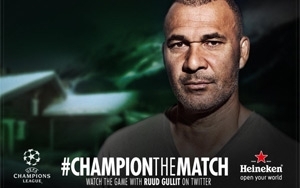 Heineken aims to bring fans closer to the sport they love with its 2015 UEFA Champions League soccer campaign.

This year marks the eleventh year the beer company has partnered with the league. Heineken sponsorship is scheduled to run until the end of the 2017-18 season.

In order to validate suspicions that soccer fans are a zealous bunch, Heineken recently conducted a social experiment, which filmed unsuspecting fans in a New York City bodega during lunch hour. They were offered a choice with a twist: Go back to work, or drop everything and immediately fly to Europe to watch a UCL match live.

The only catch: They'd have to bring their bosses with them.

A video captures how a typical lunch break turned into the chance to experience the Champions League, live from Barcelona.

Fans age 21 and over can follow @HeinekenSoccer and the hashtag #ChampionTheMatch, where they can receive real-time access and "live commentary" from former players, such as former UCL champion and current Major League Soccer (MLS) star, David Villa, unexpected guests, and surprise Heineken twists during marquee matches throughout the tournament.

The campaign also features a brand new television spot, created by Wieden+Kennedy Amsterdam, titled 'The Match.' The national 30-second spot captures just how far one fan and his friends will go to watch the big match, wherever they are.

This year also marks the introduction of the Heineken UCL promo packs in the U.S. Fans 21 and over can purchase a promo pack, and text HNKUCL to 8500 for a chance to win instant daily prizes such as UCL branded gear, or even V.I.P. trips to a UCL match in Europe, by spinning the prize wheel.

UCL fans will have an exclusive opportunity to get up close and personal with one of the most coveted trophies in sports, via the UEFA Champions League Trophy Tour Presented by Heineken.

The seventh consecutive tour will cover three U.S. stops, before the journey comes to an end at Berlin's Olympia stadium on June 6 for the UEFA Champions League Final. During the tour, fans can take photos with the iconic trophy, see UEFA Champions League memorabilia and meet soccer legends and UCL winners in person.