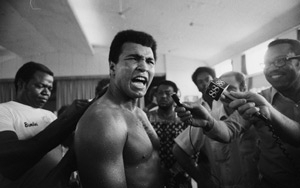 The Baltimore-based sporting goods powerhouse says it has reached a multi-year partnership with Authentic Brands Group, and that it will use the heavyweight’s image, video, and inspirational quotes in a new marketing campaign. And next month, it plans to introduce a capsule collection of lifestyle apparel for men, women and kids, with the full collection scheduled to roll out in the fall.

The 73-year-old Ali suffers from Parkinson’s Disease, and has already begun promoting UA-branded boxing videos on his Twitter page,  with the #ImABadMan hashtag. And while most of Under Armour’s target audience wasn’t even born until after he retired in 1981, his name still resonates. “Ali is so much more than an athlete,” Barry Janoff, executive editor of NYSportsJournalism.com, tells Marketing Daily. “He’s one of those people — like Babe Ruth, Arnold Palmer or even Harry Houdini — who is simply bigger. Everyone knows his name.”

Many will even recall his colorful nicknames — like “The greatest of all time” or “The Louisville Lip” — as well as his epic fights, including taking on George Foreman in the Rumble in the Jungle, or Joe Frazier in the Thrilla in Manila. He continues to be one of the best-known sporting figures ever, voted “Athlete of the Century” by GQ, for example.And importantly for Under Armour, which is undergoing rapid international expansion, “his appeal is really global,” adds Janoff. “Who can forget the world’s reaction when he lit the Olympic flame in Atlanta back in 1996?”

Still, there may be some risks, Jon Last, president, Sports & Leisure Research Group, tells Marketing Daily. While he calls Ali “an iconic figure, whose brand transcended sports to represent a number of larger and culturally important themes,” he points out that the fighter’s powerful image of 30-plus years ago may be “supplanted by a starker, potentially tragic present day version.” And he also points out that boxing just isn’t what it used to be, and has “suffered significant erosion in the sports' fan's mindset.”

Janoff, however, doesn’t see much of a downside. Even though Under Armour continues to gain on its rivals, and reportedly has already passed Adidas in some categories, “it still likes to be thought of as the underdog,” he adds. And by signing athletes of this caliber, as well as Stephen Curry, Michael Phelps, and Tom Brady, “it’s clear that Under Armour wants the conversation to be all about Under Armour.”

“It’s an honor to align the Under Armour brand, which has long celebrated the unyielding will of an athlete, with such an icon,” says Glenn Silbert, UA’s VP, Mens, Outdoor and Team Sports, in a press release. He adds that the company looks forward to introducing “Ali to the next generation of athletes around the world.”