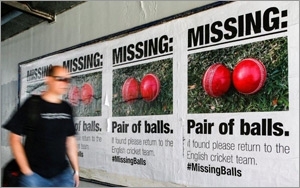 Trash talking has always been part of sports, but usually the chatter remains in the stadium.
Last week, however, Naked Communications and Australian-based online sports betting platform Sportsbet took taunting to a global level to support Australia’s opening match against England in the Cricket World Cup on Saturday, February 14.

Last week, mysterious  posters began appearing around Melbourne asking anyone who had seen a missing pair of balls - of the cricket variety - to please return them to the English cricket team.
These messages were joined by similar tongue-in-cheek posters appearing on helicopter banners in a fly-by of England’s training session on Friday, as well as on outdoor billboards that were waiting for the England team as they left their hotel on the morning of the match.

Finally, before the game, in which Australia beat England by 111 runs, a billboard revealed the irreverent campaign was the work of Sportsbet.

"You know a great idea when you see it and the pared back simplicity of this campaign was its brilliance," says Ken Robertson, Head of Brand & Advertising at Sportsbet.

Ultimately, the stunt generated over six million impressions via social media, moving the campaign beyond Australia. There were also numerous unpaid social media and media outlets worldwide speculating in about who might be responsible. The effort also saw Cricket and Australian celebrities such as Rodney Hogg, Jonathan Agnew and even competitor Ladbrokes mention the campaign on Twitter.

“Sometimes in advertising we tend to over think things, but in the best possible way, this is not one of those occasions. Lighthearted real world communications that the general public embraces and voluntarily spread through social — feels like a win to me," says Carlos Furnari, Creative Director at Naked Communications Melbourne.

Leveraging popular cultural events, such as the ICC tournament, is key to attracting attention both online and off-line. "The Sportsbet project is successful because we are tapping into national pride and the human truth about competition," says Izzy DeBellis, Global Chief Creative and Strategy Officer, Naked Communications.

"Trash talking has always been a part of sports. Naked has a history of non-traditional solutions and, in this case, we are using offline media to start a conversation online. The billboard isn't the final output – picking a fight and creating a conversation is – we just used airplane banners and target media to get the attention of the audience on the way to the matches."

This was the first project Naked developed with Sportsbet. Naked Communications has a history of creating campaigns that are designed to provoke a response and generate viral buzz. Its "Steal Banksy" promotion in 2012, for instance, invited guests to attempt to steal highly-valued art from the Art Series Hotels that also attracted widespread attention and free media coverage.