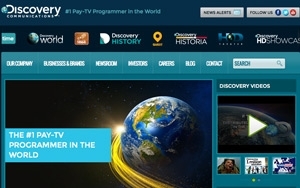 Discovery Communications' fourth-quarter U.S. advertising came in as expected -- with a slight dip versus the previous year’s quarter.

U.S. advertising revenue was down 3% to $398 million, with overall international ad revenues higher by 7% to $433. Both lifted Discovery’s advertising take to $831 million for the period -- a 1.7% improvement.

Discovery's advertising results are in keeping with other media companies, which have also been seeing slightly lower advertising revenue results toward the end of 2014.

Affiliate revenue continued to ink healthy growth -- 16.4% company-wide to $640 million. U.S. distribution revenue was up 8% to $333 million, with international distribution 24% better at $412 million. All this helped to boost Discovery's total revenue up 9% for the period, to $1.68 billion.

International Networks, which include a big benefit from its Eurosport acquisition, were up 17%, to $884 million.

Fourth-quarter net income was $250 million for a 13% decline (a decrease of $39 million), from $289 million due to higher restructuring costs and lower equity earnings this quarter.