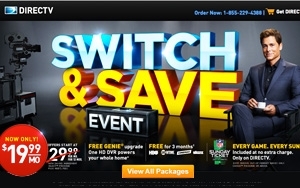 DirecTV boosted revenues in its fourth quarter by 4% -- mostly from gains in its U.S. business.

DirecTV's Latin America business witnessed a 118,000 gain in subscribers -- now totaling 12.5 million. Revenue was down to $1.73 billion from $1.768 billion. DirecTV SkyBrazil remained essentially the same at 5.6 million, with revenue dipping to $923 million from $963 million.

Most of these results met or slightly exceeded expectations. DirecTV’s stock was basically flat after the market’s opening -- up 0.07% to $87.40.