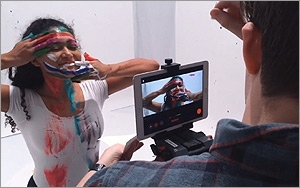 Apple ran the advertisement Make A Film With iPad during the Oscars Sunday, highlighting fifteen students from the Los Angeles County High School for the Arts shooting, editing, coloring and scoring short films with the iPad. The audio in the background tied in excerpts from Martin Scorsese's commencement speech to the NYU Tisch School of the Arts Class of 2014.

The spot focuses on a similar concept to Director Christopher Coppola's PAH-Fest, a global festival held in locations around the world. Coppola, who has been doing this for years, asks students to use video-enabled mobile phones to create movies as art, while the Apple commercial partnered with students to teach them how to create movies with an iPad.

In Apple's TV spot, Scorsese never mentions the Apple iPad Air, moviemaking apps or the process of shooting a movie on a tablet during the presentation. The images tell the story through a collection of arts and moviemaking techniques done on the iPad. The one-minute spot features clips of various teams using the tablet to shoot and edit a variety of scenes.

This is the second consecutive awards show where Apple pursued an audience through a targeted television advertisement. Earlier this month the company ran an ad during the Grammys. In the ad that ran during the Grammy's, director So Me created a short film focusing on a collaboration between Swedish recording artist Elliphant, DJ The Gaslamp Killer, and English producer Riton.

A list of the software students used on Apple's Web site reveals that Apogee MiC made it possible to record high-fidelity dialogue as it happened, while GarageBand allowed them to easily mix, fade, and trim each audio take. The students used VideoGrade to adjust color and saturation. To collaborate throughout production, the students used Final Draft Writer to create production-ready scripts with formatted dialogue and scene notes.