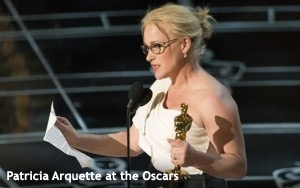 A simple thank-you would have sufficed.

Generally speaking, that’s my personal reaction to Oscar acceptance speeches that veer away from thanking agents, spouses, children and the family pet and then morph into full-blown commentaries on the state of the planet. For some reason, I have a low threshold of tolerance for these kinds of speeches delivered by Hollywood celebrities on Oscar night.

But a post-Oscar analysis of comments posted on social media during the telecast reveals that many people feel differently than I do (no big surprise there). They seem to like it when the stars speak out.

Last night’s Oscars seemed particularly fertile for this kind of speech-making. Among the topics that came up and scored high on social media were: Patricia Arquette’s plea for gender income equality, “Imitation Game” screenwriter Graham Moore’s words of encouragement for gay teens who are contemplating suicide, Common and John Legend’s remarks about civil rights, and Julianne Moore’s comments on Alzheimer’s awareness.

An analysis of Oscar-related social-media messages conducted by Amobee Brand Intelligence found Arquette’s acceptance speech (she won for Best Supporting Actress for “Boyhood”) generated 168,930 “social mentions.” Perhaps more importantly, Amobee judged the “sentiment” for her and her remarks to be 48 percent positive. (The remaining 52 percent in this, as in other cases, includes a high percentage of “neutral” messages and a smaller percentage of “negative” ones).

On the other topics and speeches on social issues, Amobee came up with these results:

Common’s and John Legend’s performance of their Oscar-nominated song “Glory” and then their civil rights acceptance speech after they won the Best Original Song Oscar produced 137,441 social mentions and a 49 percent positive score.

Julianne Moore’s acceptance speech after she won a Best Actress Oscar for “Still Alice” -- a movie about a woman with early-onset Alzheimer’s -- produced 64,764 social mentions and a “positive” score of 53 percent, including 8,040 social media messages that mentioned Alzheimer’s specifically.

Of course, almost no one but the world’s biggest crank would boo someone making a brief speech in support of feel-good causes such as Alzheimer’s and ALS research (the latter disease came up in the context of Eddie Redmayne’s Oscar win for playing Stephen Hawking), equal pay for women and preventing depressed kids from killing themselves. In fact, I found Graham Moore’s speech, on that subject, to be the best of the bunch.

But it’s also true that, while these speeches and social-cause topics generated “positive” reactions, they paled next to the telecast’s entertainment highlights -- moments that had nothing to do with social causes.

For example, Lady Gaga’s medley of songs from “The Sound of Music” generated 577,144 social mentions (38 percent positive) and Neil Patrick Harris’ hosting generated 219, 375 messages (34 percent positive). I thought he did very well and deserves to be asked back.

No moment in this year’s Oscars came close to last year’s social-media high point: Ellen DeGeneres’ selfie with a gaggle of top stars taken during the Oscars. Her subsequent Tweet of the photo was retweeted 779,295 times in a half-hour, according to Amobee. And there was no social cause attached to it whatsoever.