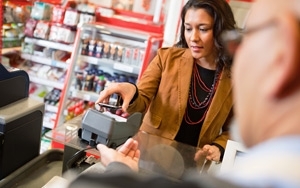 Google announced a deal Monday to acquire technology and intellectual property from mobile payments service Softcard that will integrate into its Wallet service. The move will pre-install the app on mobile devices from wireless carriers AT&T, T-Mobile and Verizon Wireless.

Ariel Bardin, VP of payments at Google -- which introduced Wallet in 2011 -- estimates that later this year all Android smartphones running the KitKat operating system or higher will have access to Google Wallet as well as features such as Tap and Pay, where a user can tap their smartphone on a special sensor that processes the payment.

eMarketer Analyst Bryan Yeager calls the step important for Google, but Android users will also have options from Samsung's recent acquisition of LoopPay.

The news from Google comes on the heels of last week's announcement from Samsung that it will acquire payments startup LoopPay. Prior to Samsung's announcement, the electronics company had invested in the startup, along with Visa and Synchrony Financial.