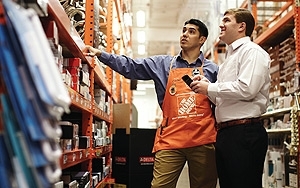 Propelled by a strong holiday sales — and its biggest Black Friday ever — the Home Depot reported an 8.3% bump in sales to $19.2 billion for its fiscal fourth quarter, with comparable-store sales climbing 7.9%. And net earnings rose 36% to $1.4 billion, up from $1 billion in the same period a year ago.

"We had a strong finish to the year, as strength across the store, the recovering U.S. housing market and solid execution aided our business,” says CEO Craig Menear, in a conference call announcing the results. Consumers are keen to spend more to fix up their homes, and he says its online channel, up over $1 billion, is increasingly important to the way they shop.

“It’s a changing retail environment, with 40% of online sales culminating in in-store transactions,” he says, adding that rather than treat it as a separate entity, “we see it as additive. It’s hard to parse out the pure e-commerce, so we look at it as a blended margin. It’s a testament to the interconnectedness of our customers’ shopping desires.”

Company executives also say they are continuing to study how closely spending trends track the gains in the U.S. housing market, and point out that 2014 is the first year since 2005 when spending on remodeling is up.

He says the company is also looking forward to a stronger spring, with new launches scheduled for grilling and the patio category.

But the Atlanta-based retailer is cautious about its forecast for the year ahead, partly because of the strong U.S. dollar — telling investors it expects sales to grow between 3.5 to 4.7%, with comparable store sales posting growth between 3.3 to 4.5%.

And the company says it is not able to estimate the costs related to its recent data breach, and that its expenses will be higher as it continues to “harden” its IT.