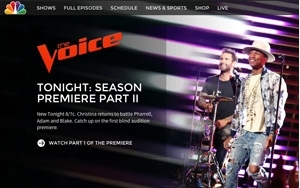 NBCUniversal had high-single-digit percentage broadcast advertising growth versus a decline in its cable network advertising in the fourth quarter.

The Comcast Corp. company had a 3.1% rise in advertising revenue for its broadcasting network and stations. Adding in higher retransmission fees, NBC’s broadcasting business revenue had an overall 4.8% gain during the period to $2.335 billion.

NBC’s cable network ad revenue sank 5.6% in advertising, but climbed 4.6% in its distribution revenue. All that gave cable virtually the same revenue results versus the same period a year before -- $2.327 million in fourth quarter 2014 versus $2.324 million in the fourth quarter of 2013.

Film was down due to unfavorable comparisons a year ago, when in the fourth quarter there was strong revenue from the home entertainment sales of “Despicable Me 2.” Theme parks had higher guest attendance and spending coming mostly from its Orlando, Florida park’s “The Wizarding World of Harry Potter.”

Comcast witnessed a slight increase in its video customers -- 6,000 -- during the fourth quarter. But it was down for the year as a whole, ending with 22.383 million. High-speed/broadband subscribers grew to 21.962 for the year. Voice customers also increased to hit 11.193 million, from 10.723 million.