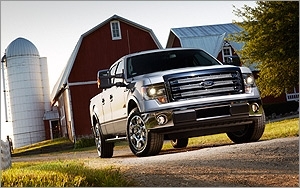 Yes, consumer confidence fell this month -- but the Conference Board said it is a reflection of short-term outlook. Long-term looks good. And that confidence dip sure isn’t hurting auto sales. February is shaping up to be the 12th straight month of year-over-year car and truck sales increases in the U.S.

Kelley Blue Book is predicting 8% growth this month versus last February. If the company is correct, the month will see 1.29 million units delivered. Alec Gutierrez, senior analyst at the auto research, pricing and shopping site KBB.com, said in a release that consumers are still optimistic: “Along with an unemployment rate that continues to drop and low interest rates, most signs remain very positive in the automotive market.”

KBB.com says Toyota will have the highest gains this month, driven by the new Corolla sedan, which last month was the best-selling car in the U.S. after another perennial leader from Toyota: Camry. Kelley Blue Book says the Japanese automaker will beat all other automakers with a 13% gain.

It won't hurt Toyota or Honda that gas prices are heading up again this month. The firm sees the latter experiencing double-digit growth as well, driven by the CR-V utility, Honda's best-selling vehicle.

Bucking the gasoline price trend are full-size pickups, driven by the new Ford F-150, whose volume may actually be helped by higher gasoline prices because of the attention it has received for innovative use of aluminum, which lightens the vehicles weight by about 700 pounds.

But as Ford continues to build inventory toward the right trim mix of its new pickup, notes KBB.com, there will be strong competition from General Motors (Chevrolet Silverado and GMC Sierra) and Fiat Chrysler Automobiles (Ram Truck brand.)

Even with the rate of auto sales losing some steam in coming months, total 2015 projected sales of 16.9 million units still represent a 2.5% year-over-year increase, and the highest since 2005.