Horizon Dances For One Billion Rising 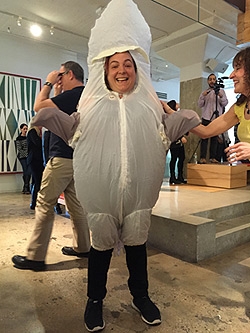 Over the past month, Horizon Media has hosted a number of fundraising events for One Billion Rising, a nonprofit that encourages people across the world to come together to dance and rise to demand an end to violence against women.

Horizon Media kicked off the final and largest event last week to round up fundraising efforts: The Horizon Media Dance Off Championship.

Employees were urged to bring their phones to use text voting to select their favorite team. Ultimately, “Beach Party” beat out “Gross Impressions,” Dang Gamily and Don’t Believe Us Just Watch for the disco ball trophy prize.

While each team exceeded expectations, voters say Beach Party dominated the competition largely due to the team’s parody of Katy Perry’s Super Bowl half time show.

The shark outfit didn’t hurt their cause however. In fact, the dancing shark received an additional round of applause and cheering.

Other recent cause-related efforts from the agency including helping children trick-or-treat and inviting small businesses to set up holiday pop-up shops.

Horizon’s Chief Talent Officer, Eileen Benwitt says the agency always strives to come up with creative and experiential philanthropic opportunities to engage everyone at Horizon Media. That said, this initiative was a particular favorite of workers, due to two factors: creating a competition among a competitive bunch of media folks and watching the boss and executive leadership dance.

The event raised $5,000 for One Billion Rising. This is the second year that Horizon has supported the organization.