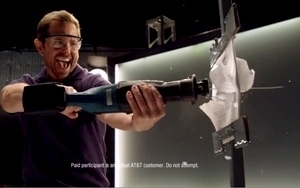 Sprint’s “Cut Your Bill in Half” promotion garnered a decent amount of initial attention, but turning that attention into sales and sustained interest has been a bit of a challenge.

“This promotion does seem to be getting a lot of attention overall,” Rachel Eisenberg, vice president of strategy and marketing at Millward Brown Digital, tells Marketing Daily. “We do see a lot of people getting to that [landing] page."

However, only 4% of customers who visited the site started the process to become a Sprint customer by taking steps to upload their bill. Eisenberg says this may have been due to the complexity of the promotion (consumers may not have wanted to share such information over the Web; and instead went in-store to complete the promotion) and the fact that the Web portion of the promotion wasn’t live until about midway through December. (The data only covers consumers who went to the site from a laptop or desktop, though Eisenberg says it’s unlikely many people went to the site via their phones based on the complexity of the promotion.)

“Still, getting 4% to click-through is indicative of heading in the right direction,” she says. “It’s [showing] an evolution of how Sprint is trying to engage with its customers.”

In any event, the promotion succeeded in generating interest in Sprint, but the company has had trouble sustaining that interest. According to YouGov BrandIndex, interest in Sprint shot up when the promotion was launched: 40% of consumers 18 and over were aware of Sprint’s advertising in December, up from 31% in November. Purchase consideration also increased to 13% in December form 10% in November. However, the brand has dropped back to 10% purchase consideration since the new year, says Ted Marzilli, CEO of YouGov BrandIndex.

“The campaign has lost momentum. This space is so competitive, it’s hard to develop something and keep it fresh,” Marzilli says. “Turning purchase consideration into [actual] purchase is hard in this space.”