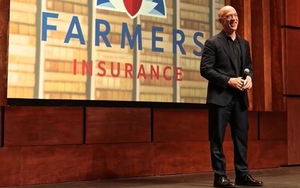 Even before he won the Oscar, Farmers Insurance already had complete faith in J.K. Simmons.

The actor, who won for best supporting actor at the 87th Academy Awards Sunday night for his role in “Whiplash,” has starred in a plethora of the insurance company’s ads dating back to 2010, and even in a long-form recruiting video. He is also featured in the art on the brand's Twitter page.

His character Professor Nathaniel Burke was created by Farmers’ ad agency, RPA, Santa Monica, Calif., which has described him as “tough but fair, lovable yet gruff.”

"We are thrilled for J.K. and the recognition he’s receiving for his work in ‘Whiplash,’” says Mike Linton, chief marketing officer of Farmers Insurance. "Consumers are very positive about our 'Smart' branding campaign in which J.K. plays a key role as 'Professor Burke.'"

An Oscar win will likely give the prolific character actor more opportunities. Of course Farmers would not divulge the terms of Simmons’ contract or how the Oscar win might affect the terms going forward, but there are more ads featuring him in the pipeline.

"On the immediate horizon is more work with J.K. to continue to bring 'Smart' and Farmers into more households,” Linton tells Marketing Daily. “You’ll continue to see Professor Burke as a critical element of the Farmers campaign in the foreseeable future.”

The actor also won the same category at the Golden Globes earlier this year.

During a press conference after his win on Sunday, Simmons poked fun at his popularity from the Farmers commercials. When asked what winning the award means to him, he said, “Well, maybe more people saw me tonight than see me in the [Farmers Insurance] commercials for the first time,” he said. “Because I know those are seen by more people than the films.”

Ad critic Barbara Lippert notes that besides Farmers, Simmons is also the voice of the yellow M&M in commercials for the candy brand.

“He's got a forgettable Everyman face that has allowed him to do a ton of ads on the way to collecting his much deserved Oscar,” she says. “He brings a new well of good feeling for customers to associate with Farmers.”

Lippert noted the irony that the actor, who plays a kind-hearted Farmers professor, won the award for playing a sadistic teacher in “Whiplash.”

“I think Farmers should be thrilled that they have that caliber of talent in their ads,” Lippert says.